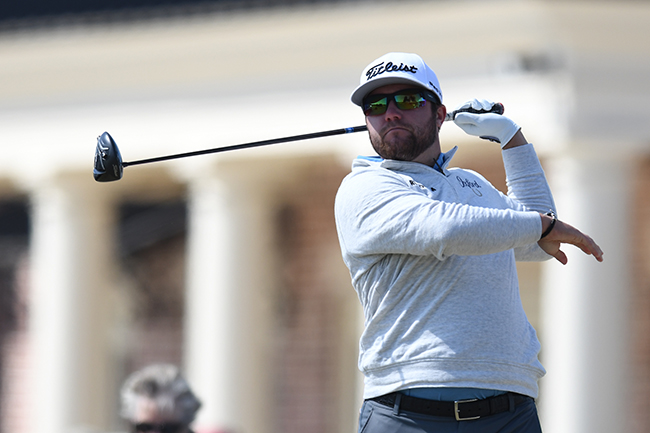 Ben Taylor hits a tee shot on the 1st hole during the opening round of the North Mississippi Classic at the Country Club of Oxford, in Oxford, Miss. on Thursday, April 19, 2018.

A couple months have passed since Oxford held its first professional sporting event. The North Mississippi Classic, Mississippi’s first event on the PGA’s Web.com Tour, took place in late April and organizers have been able to take a step back to evaluate where to go from here.

The event still has two years remaining on a three-year deal between the Country Club of Oxford and the Web.Com Tour. With this year’s event serving as a live test, tournament director Steve Jent has been meeting with members from the Web.com Tour to plan for the 2019 event.

“We’re kind of in discussions right now with the Web.com Tour about a bunch of things, including our date for next year,” Jent said. “We wouldn’t want to play any earlier than (April) just because it is in the northern part of the state and the longer you can go the better it is for the golf course. Obviously there’s a lot of discussions that have to go on with the Web.com Tour and we’re still looking at a bunch of things.”

There had been talk of potentially moving the tournament into May but nothing has been finalized. The 2019 Web.Com Tour schedule should be out within the next six weeks, along with the PGA Tour and Champions Tour schedules.

With it being the first sporting event of its kind to be held in Oxford there were plenty of variables in play, which could play a part in deciding to push the tournament further into the year. During this year’s tournament, participants and spectators experienced weather from all four seasons. Cold winds at the beginning of the tournament were followed by warm days in the middle rounds and closed with torrential rains on Sunday, causing tournament officials to revert back to the 54-hole leaderboard.

Ole Miss baseball hosted Georgia the same weekend as the golf tournament, which also had its schedule rearranged due to the weather. A doubleheader was played on Saturday keeping the third round from having large crowds.

Jent noted they did not count number of tickets sold or get an official number of how many people attended the golf tournament.

“I thought it was good,” Jent said of attendance. “We know school’s in session obviously during the week. We felt like it was a good turnout on Saturday. With the weather coming in on Sunday that folks weren’t going to come out with that weather. …(the baseball doubleheader) definitely impacted our attendance but those are things you can’t control and you just roll with it.”

Jent has attended a couple PGA events since the North Mississippi Classic and received positive feedback from golfers who participated, as well as other officials.