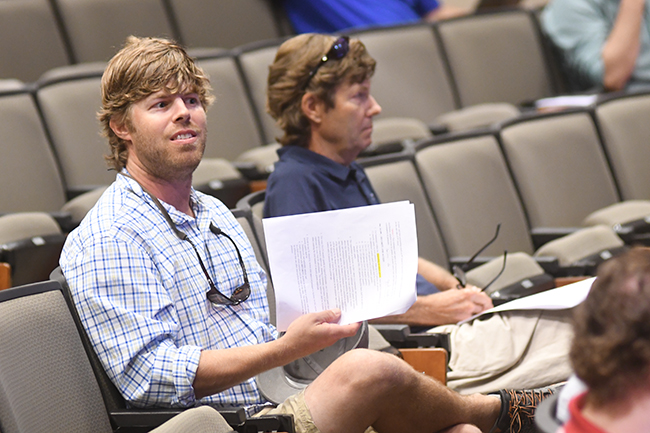 Hudson Chadwick speaks during a public hearing concerning a Downtown Entertainment District at the Oxford Conference Center, in Oxford, Miss. on Monday, July 2, 2018.

The Oxford Board of Aldermen voted on Monday to expand its proposed Downtown District ordinance to the whole city.

While Monday’s vote – held to determine the next step in the discussion between the board and the public – is not binding, Oxford Mayor Robyn Tannehill cast the deciding vote in favor of Option 3 in the latest draft of the ordinance, applying the ordinance to “all businesses which engage in the sale or distribution, whether or not by permit, of alcohol and/or beer and light wine in the City, for consumption on premises.”

“I thought it went well. The vote to expand to the entire city was big for a majority of my clients,” said Milton “Dee” Hobbs Jr., a lawyer who represents businesses like The Library, Round Table and the Lyric. “It’s going to bring in all these big-box stores like Buffalo Wild Wings.” Hobbs added that this ripple effect could make the passing of the Downtown District ordinance in its current form that much harder.

The ordinance’s previous drafts focused on a smaller block within the Square, prompting backlash from local restaurant and bar owners.

At the June 19 Board of Aldermen meeting, Ajax bar manager Phil Landers cited Bouré, located down the street from the diner, as a business that would have been exempt from the ordinance as an example of unfairness. During Monday’s hearing, many agreed it would simply push businesses to areas in Oxford where they wouldn’t have to comply.

“I can promise that, in the next six months, if we don’t do this on West Jackson, I’m going to open a business on West Jackson,” said Griffin Tanner, owner of The Levee of Oxford and the Round Table.

Mayor Tannehill kicked off Monday’s four-hour meeting by spending the first 20 minutes explaining the chain of events that led to the proposal of the Downtown District ordinance. Tannehill cited a fatal DUI incident in 2003 as the start of the discussion, rather than a response to a shooting incident at The Lyric Oxford in April. She also insisted the meeting’s early-Monday time was the result of her consulting with restaurateurs on the best time for them to attend.

The ordinance, Tannehill said in her opening remarks, was mainly about safety and curbing “a culture of alcohol,” as former Oxford Mayor Richard Howorth once put it.

“Well (the French Quarter) is what we’re trying to get away from,” Tannehill said. “I want it to be like it has been, for 25 years, where people can walk around, be safe, enjoy themselves, get home safely. I want to encourage the fine dining and entertainment that we have in downtown Oxford, but we have to be responsible.”

The board also decided to change the language concerning event permits to “required notice” to more accurately reflect the fact that their only desired outcome was to be better informed on how to staff and deploy police.

The board also discussed limiting the required notice to only state expected occupancy without disclosing the details, such as who is performing, of the event itself. Despite widening the ordinance’s scope, the only two venues that would have to give required notice remain The Lyric and The Powerhouse.

ID scanners have been an issue of contention between business owners and the board, with many bar owners and bar managers decrying their effectiveness and high costs. Instead, the board, along with East and Rusty Hanna, Chief of Enforcement for Mississippi Alcoholic Beverage Control, suggested that bar owners could use an app like Intellicheck. The app, which looks for formatting errors, was completely accurate in an OPD test of 647 IDs and, at $49.99 for an initial purchase, plus $10 for each additional tablet or phone connected to the service, is far cheaper and faster than the $1,000-plus machines business owners were citing during the previous public reading.

It was also proposed that gas stations, liquor stores and other establishments that sell alcohol should also implement the ID-scanning portion of the ordinance.

The board also discussed the logistics of how to implement security guard requirements given how varied events can be and extending a grace period longer than five working days for security camera failures.