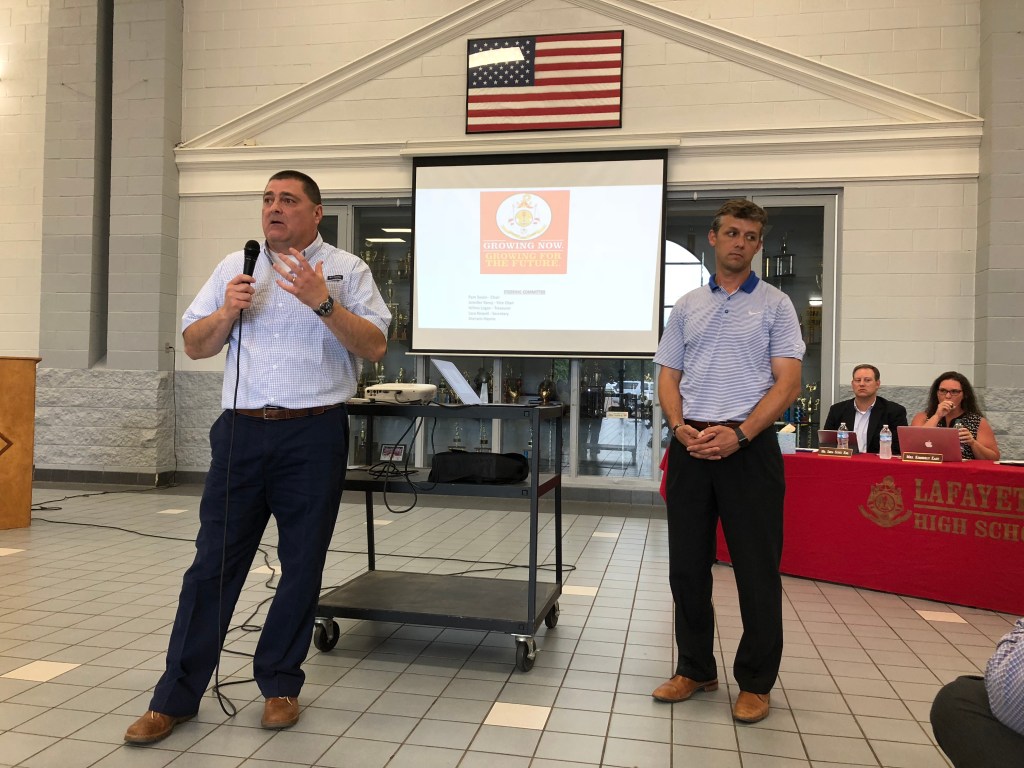 Adam Pugh and Casey Rogers answer questions at the LCSD board meeting on Monday, July 2.

During the meeting, the board answered questions from the public concerning a proposed school bond and a potential solution for overgrowth.

Though no date has been set to vote on a bond issue in Lafayette County, LCSD is growing at a rate of 2.5 percent per school year, with buildings already at full capacity.

The overcrowding issue will only grow worse unless measures are taken, said superintendent Adam Pugh.

“This did not take us by surprise,” Pugh said, “We had some existing debt that we refinanced, knowing that we were going to have to build because we were exceeding our capacity… We’re looking into the future to try to solve this growth problem for many years to come.”

The current overpopulation for the Lafayette Lower Elementary School is 153, the middle school, 114, the upper elementary, 100, and the high school, 10, meaning the largest areas in need of space are the elementary and middle schools.

Casey Rogers, president of Innovation Construction Management, explained that the school district wants to maximize the assets they already have. The current plan, “and the only alternative if the bond is not passed,” Rogers said is to use five leased trailers for classroom space: two for the lower elementary, one for the upper elementary, and two for the middle school.

Rogers said that increasing the number of trailers with the growing demand of classroom space would be impractical.

Said Pugh,“We would put pull-out programs in the trailers, not core classes. I don’t like using these trailers, but we’re going to have to because we simply don’t have the classroom space for the number of students we have.”

If the bond is approved, 15 percent of the district’s overall value, approximately $23 million, will be used to construct a new elementary school that will hold kindergarten through second grade, on leased land off County Road 406.

Students in third grade will be relocated to the existing elementary school.

For the middle school, not only is classroom space short, but adequate cafeteria space is an issue as well. To compensate these problems, Rogers suggested building a covered walkway to the high school dining hall. The school district’s plan also calls for adding four classrooms to the existing middle school.

In order to raise the $23 million, Attorney Jim Young discussed the repercussions on typical taxpayers: “.001 per one-thousand dollars, or a 1-mill tax increase on property owners.” Young said.

While Young said he can only give general figures, Pugh said a calculator will be put on the district’s website so that the individual taxpayer can calculate how they will be directly affected by the bond.

“The board has been very wise in not just thinking about this project but also thinking about the whole campus. What is it going to look like in 20 years? Where are we going?… It’s a whole list of planning, looking to the future,” Rogers said.