KNOW YOUR FOE: Another year, another wave of talent for Alabama 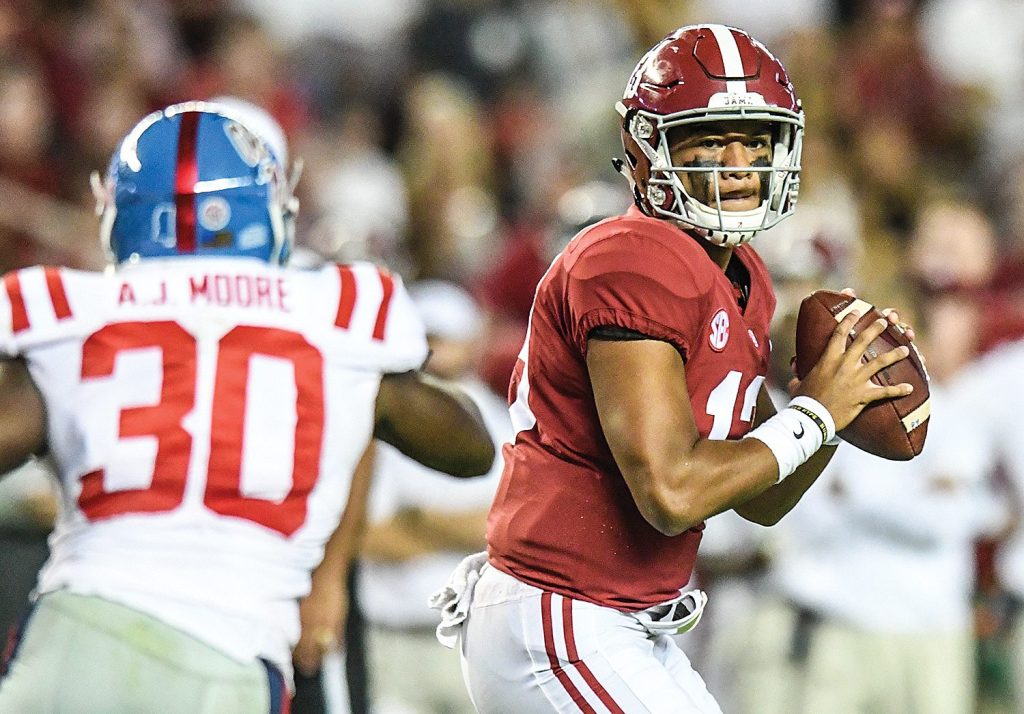 EDITOR’S NOTE: This is the third of a 12-part series breaking down each of Ole Miss’ football opponents for the 2018 season.

Alabama’s latest rash of draft picks included a punter going to the Green Bay Packers in the fifth round.

In all, the Crimson Tide set a school record with 12 players taken in a single draft back in April. Time to rebuild? Not when you’re Alabama. And not when you’re Nick Saban, whose process includes four national titles in the last seven seasons (and six total) despite the NFL Draft annually claiming some of the Tide’s top talent.

Alabama has had double-digit players drafted in back-to-back years. Yet with the ability to reload with Saban’s next wave of four- and five-star recruits, the defending national champions could very well be in the same spot that they ended last season in the polls when the Tide visit Oxford on Sept. 15 to take on Ole Miss in both teams’ SEC opener (6 p.m., ESPN).

It could start at quarterback in a move that would have nothing to do with the incumbent leaving for the next level, an example of Alabama’s talent surplus. Rising junior Jalen Hurts, who sports a 26-2 record as a starter, started all 14 games there last season before Saban turned midway through the national championship game to one of those former five-star signees in Tua Tagovailoa, who helped the Tide erase a double-digit halftime deficit against Georgia with a pair of touchdown passes, including a 41-yard strike in overtime to give Alabama the walk-off victory.

There wasn’t much separation between the two in the spring. Hurts had the stage to himself in Alabama’s spring game with Tagovailoa sidelined with a hand injury but didn’t stretch the field much, completing 19 passes for just 195 yards. Regardless who’s taking snaps, he’ll have the help of a running game that returns 1,000-yard rusher Damien Harris with all but one starter back on the offensive line.

Junior Josh Jacobs and former five-star signee Najee Harris are also back as part of the backfield rotation to help alleviate the pressure on Hurts or Tagovailoa, but Alabama still has weapons out wide despite the losses of first-rounder Calvin Ridley, Robert Foster and Cam Sims. DeVonta Smith caught the game-winner in the national title game, Jerry Jeudy had 14 receptions as a freshman, and rising sophomore Henry Ruggs III led the Tide with six touchdown receptions last season.

Alabama lost seven defensive players to the draft with most of those coming in the second and third levels, but there are more-than-capable replacements waiting their turn on a unit that led the nation in total defense and scoring defense last season.

All-American Minkah Fitzpatrick, Anthony Averett, Ronnie Harrison, Levi Wallace and Tony Brown are gone from the secondary, but Trevon Diggs (6-foot-2) and former five-star recruit Saivon Smith (6-1) are poised to step in as the Tide’s next pair of big, physical corners. Shyheim Carter is in line to start at nickel corner while Patrick Surtain Jr., the nation’s No. 1 cornerback recruit in the 2018 cycle, could quickly join the rotation as a true freshman.

Dylan Moses and Mack Wilson, a pair of former five-star signees, lead the competition at inside linebacker after combining for 70 tackles last season. Edge rusher Rashaan Evans is also gone from the Tide’s 3-4 defense, but Christian Miller, Terrell Lewis, Anfernee Jennings and true freshman Eyabi Anoma — a consensus five-star prospect in the 2018 cycle — could help on the outside.

Raekwon Davis had a team-high 8.5 sacks last season and is back for a defensive line that will enter the season as the usual strength of an Alabama defense that was also tops in the nation against the run last season. The Meridian native could pair with senior Isaiah Buggs to form one of the more disruptive line tandems in the SEC while sophomore Quinnen Williams is in line to take over for first-rounder Daron Payne at nose tackle.

Ole Miss and Alabama have traded two-game winning streaks in the series over the last four seasons with the Tide owning the most recent one. It got ugly for the Rebels last season in Tuscaloosa amid a 66-3 drubbing, their second-worst loss in the series.