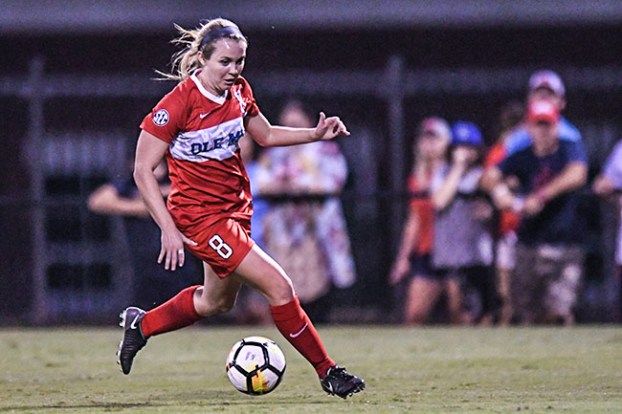 Ole Miss’ soccer team will have to make another run at the NCAA Tournament this fall without Alley Houghton.

The former Lafayette High standout tore her Achilles tendon during a recent conditioning drill and underwent surgery Thursday. Recovery could take as long as a year, which means Houghton will miss the season.

“Although I hit a bump in the road, this will only make me come back stronger for my senior season,” part of Houghton’s post read.

Houghton was a contributor her first two seasons after signing with Ole Miss as Lafayette’s first-ever Mississippi Gatorade Player of the Year, seeing action in 33 matches. Last season, Houghton scored two goals and recorded five assists in 18 matches, three of which she started.

Ole Miss finished the season 10-7-3 with a 3-5-2 mark in SEC play. The Rebels earned an at-large bid to the NCAA Tournament for the second time in three seasons before bowing out with a first-round loss at Florida State.

The Rebels open this season with a home match against Louisiana on Aug. 17.

A six-year letterwinner for coach Melinda Scruggs at Lafayette, Houghton holds Mississippi’s high school record for career goals (250). Her sister, Maddy, will be a freshman for the Rebels this fall.

Update: I have torn my Achilles tendon! I will have to have surgery, and the recovery time is anywhere from 6-12 months! Although I hit a bump in the road, this will only make me come back stronger for my senior season ?? “So do not fear, for I am with you; do not be dismayed, for I am your God. I will strengthen you and help you; I will uphold you with my righteous right hand.” – Isaiah 41:10 #HOTTYDAMNTODDY

Miles Miller will eventually get his chance to play college basketball at Ole Miss. A former standout at Meridian High,... read more