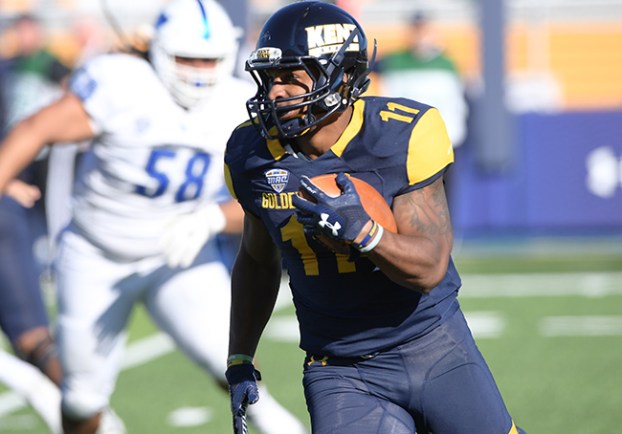 EDITOR’S NOTE: This is the fourth in a 12-part series breaking down each of Ole Miss’ football opponents for the 2018 season.

When Ole Miss takes the field against Kent State this season, Matt Luke will match wits against the youngest coach at the FBS level.

The Golden Flashes are ushering in a new era under Sean Lewis, who was put in charge of one of the nation’s most daunting rebuilding jobs when he was hired in December. Kent State, which went 2-10 last season, has suffered five straight losing seasons and has won more games than it’s lost just three times since 1977.

Oklahoma’s Lincoln Riley was the nation’s youngest FBS coach until the 31-year-old Lewis was hired away from Syracuse after two seasons as an assistant there. Kent State’s trip to Oxford on Sept. 22 will be just Lewis’ fourth game as a head coach and the Golden Flashes’ second of back-to-back games against Power Five teams where the size, speed and overall skill level will heavily favor Ole Miss.

But the Golden Flashes do have some Power Five-level talent on their roster starting at quarterback with Woody Barrett, a transfer who began his career as a four-star recruit at Auburn. Barrett is going up against junior Malik Mitchell and sophomore Dustin Crum in a competition that will linger into fall camp.

Running back Justin Rankin is back as Kent State’s most established playmaker with his versatility in the running and passing games. He led the Golden Flashes with 490 yards and three rushing touchdowns a season ago while the junior was the only player to catch more than 20 passes, snagging a team-high 42 for 311 yards and two scores.

Kent State also has its leading receiver back in Trey Harrell (347 yards, 18.7 yards per reception) and should get a boost from the return of Antwan Dixon, who missed the last two seasons with a medical condition after leading the Golden Flashes in receiving as a true freshman. But giving the quarterback enough time to find his receivers was a major problem a season ago as Kent State allowed more than 3.8 sacks per game, second-most in the FBS.

The Golden Flashes need proven playmakers on defense to help an offense that produced the second-fewest points (12.8) in the FBS last season, something they have in linebacker Jim Jones and cornerback Jamal Parker. Jones, a first-team All-MAC selection, led the Golden Flashes in tackles and sacks last season while Parker led the team in pass breakups.

Linebacker Matt Bahr, who’s back from an injury that sidelined him for most of last season, is another experienced player the Golden Flashes hope can help turn up the defensive pressure with impact plays proving to be hard to come by a season ago. Kent State averaged just two sacks a game and finished 106th nationally with a minus-7 turnover margin.

Ole Miss will enter the game on a four-game winning streak against non-Power Five opponents at the FBS level dating back to 2016.