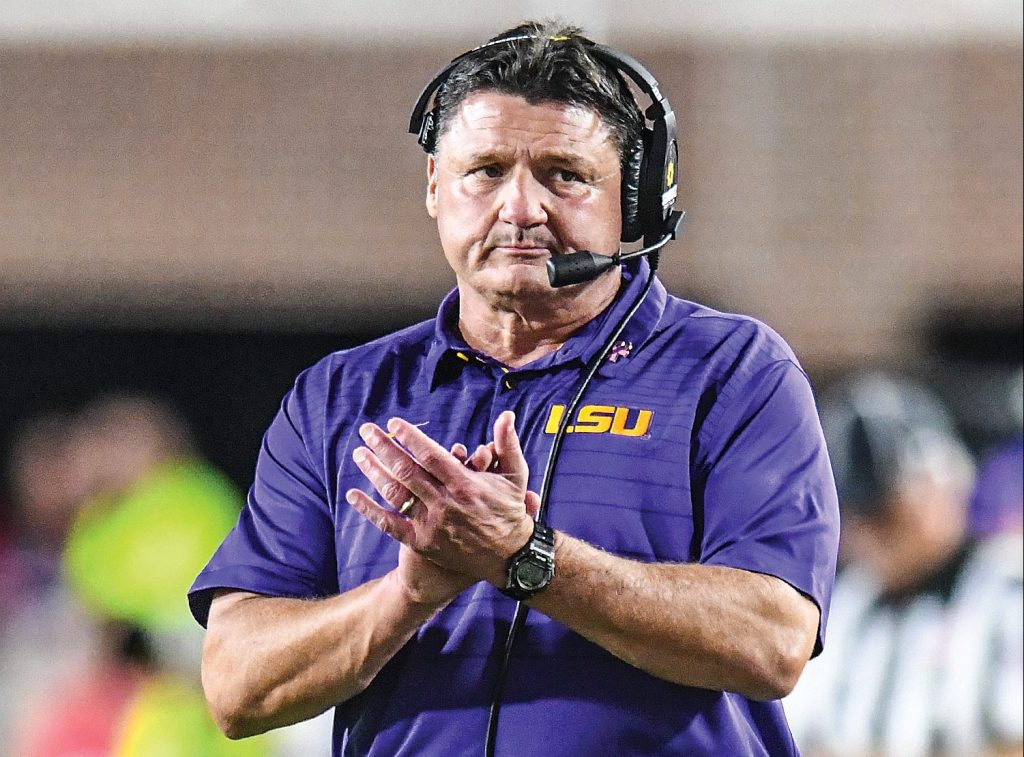 EDITOR’S NOTE: This is the fifth of a 12-part series breaking down each of Ole Miss’ football opponents for the 2018 season.

Ed Orgeron will begin this season two legs up on his former school.

Orgeron will try to stay unbeaten against Ole Miss as LSU’s coach when the Rebels make their first SEC road trip to Baton Rouge on Sept. 29. Orgeron, whose 10-25 failure as Ole Miss’ coach from 2005-07 has been well documented, led LSU to a 38-21 win as the Tigers’ interim coach in 2016 before LSU notched a 40-24 victory last season in Oxford for its sixth win in the teams’ last eight meetings as part of a 9-4 campaign.

Orgeron vs. Ole Miss, Part III, is sure to make for plenty of headlines leading up to the 107th meeting between the rivals, but the Tigers have some questions they have to answer before then, particularly at quarterback.

LSU has plenty of production returning to a defense that finished fourth in the SEC in yards allowed even with rush specialist Arden Key and fellow linemen Christian LaCouture and Greg Gilmore off to the NFL. Junior Rashard Lawrence and Texas Tech transfer Breiden Fehoko should help fill the void up front while All-SEC linebacker Devin White is back after leading the league with 133 tackles last season.

Despite losing corners Donte Jackson and Kevin Toliver II to the NFL, no group of returning defensive backs had more pass breakups (30) and interceptions (9) in the SEC last season than LSU. John Battle and Grant Delpit, LSU’s third- and fourth-leading tacklers, respectively, return at safety while rangy corner Greedy Williams, who had 11 pass breakups and six picks as a redshirt freshman last season, may be the best of the bunch.

Most of the production the Tigers have to replace is on the other side of the ball for first-year offensive coordinator Steve Ensminger.

Running back Derrius Guice and leading receiver DJ Chark are also preparing for their first NFL training camps as is quarterback Danny Etling. Senior Nick Brossette is the leading candidate to replace Guice as the featured back, though sophomore Clyde Edwards-Helaire and freshmen Chris Curry and Tae Provens may have something to say about it in a competition that will continue in the fall. Jonathan Giles, Derrick Dillon, Stephen Sullivan, Drake Davis and five-star recruit Terrace Marshall Jr. are some of the options the Tigers have out wide to put around tight end Foster Moreau, whose 24 receptions were second-most on the team last season.

Like most offseasons in Baton Rouge, the most pressing task is to find someone that can consistently get the ball to those pass-catchers and open up an offense that’s been bogged down by subpar quarterback play. Mississippi native Myles Brennan is the only quarterback left on the roster with any experience after playing in six games last season, but there wasn’t much separation among the third-year sophomore, junior Justin McMillan and freshman Lowell Narcisse this spring.

Yet the favorite to try to improve a passing game that finished in the middle of the pack in the SEC last season is former Ohio State signal caller Joe Burrow, a graduate transfer who’s immediately eligible. But the 6-foot-3, 214-pounder played in just 10 games for the Buckeyes having spent his three seasons in Columbus as a backup and didn’t go through the spring at LSU after transferring in May.

KNOW YOUR FOE: Kent State starting over with nation’s…