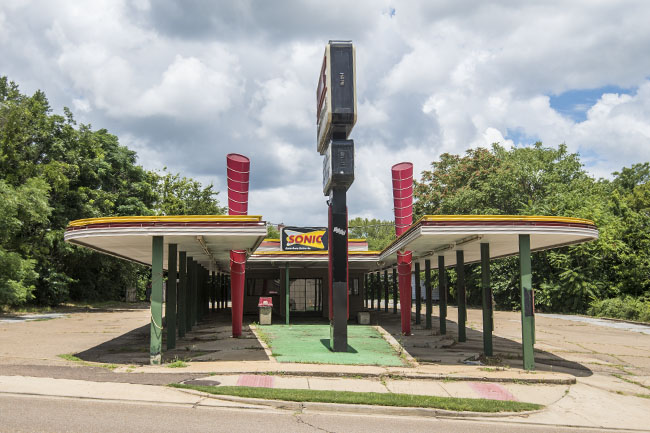 The Sonic Drive-In on University Avenue is one step closer to reopening following a meeting of the Courthouse Square Historic Preservation Commission.

The Sonic Drive-In on University Avenue is one step closer to reopening following a meeting of the Courthouse Square Historic Preservation Commission.

Before that happens, however, a new building will need to be constructed. Built in 1974 and last surveyed in 2000, the 45-year-old building was closed because it was “past its anticipated life expectancy,” according to a report from the city planning department.

The report also includes a statement from Sonic Properties that says the plumbing beneath the building’s slab is collapsing, and the electrical wiring is not capable of being updated to support modern technology or the demands of a busy drive-in.

Ron Solberg, owner of Sonic Properties, presented two options to the commission, which he said will keep the old-fashioned feel of the longstanding restaurant, but provide an updated facade in line with the needs of consumers.

Although Sonic Properties opened a location on Jackson Avenue in the last year, Solberg said the group has always planned to reopen in its original location.

“There were a lot of rumors, but we always planned to reopen,” Solberg said. “The issue is, we’ve got to do what’s right for Oxford, and that’s not a cookie cutter. So it’s taking some time.”

Out of two designs presented, the commission gave its endorsement for an Art-Deco “Retro-Iconic” design, which will feature a gray and red exterior with a concrete wall fencing in part of the patio. On the inside of the wall will be a bench for diners, with the Sonic logo on the outside and a flower bed surrounding it.

A distinguishing feature of the building will be a spire fashioned after Sonic’s iconic radio tower antenna logo. Towering above the restaurant’s one-story canopy will be a gray brushed aluminum antenna, adorned with the drive-in’s signature red LED neon light trim and topped with a red LED neon ball.

Paige Barnum, city planner, explained the decision for the commission’s design preference, saying the Art-Deco style of the building is not widely seen around the Square.

“When we think about the larger context of the historic district, we don’t really have Art-Deco pieces except for The Flamingo,” Barnum said. “It’s cool that you have two structures that are parallel to one another and so close together when you think of the cohesiveness of the district.

One major change in the building will be its physical location within the property. The current structure provides no driveway for customers to turn around, forcing them to circle back onto University Avenue when driving around the restaurant. The new structure will be set further back and will feature a driveway between the patio and the public sidewalk, making it safer for cars to drive around the restaurant.

The one constant, however, will be the restaurant’s historic sign. The vintage Sonic pole sign will remain, but move from its current location to the southeast corner of the property, and lowered to comply with current city ordinances.

“When it was built, that was a more suburban stretch of road,” city planner Judy Daniel said. “The city character has evolved since then.”

The original sign is 25 feet tall, and the new one will be lowered to no more than 18 feet. The next meeting in which Sonic will be discussed, and Solberg will present an updated design plan, will be held in August.

Mississippi Blood Services to host Battle of the Badges…