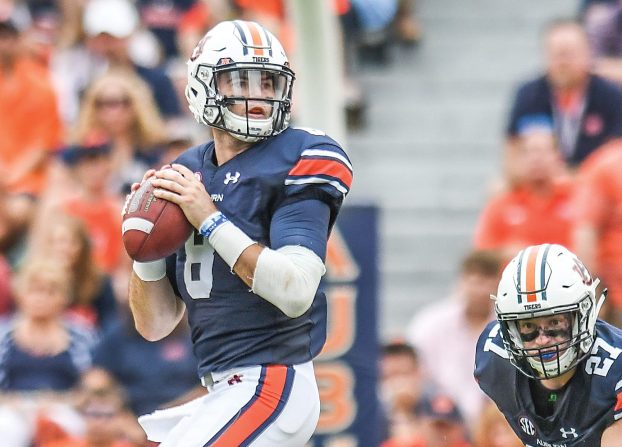 EDITOR’S NOTE: This is the eighth in a 12-part series breaking down each of Ole Miss’ football opponents for the 2018 season.

Auburn was the only team last season to beat back-to-back No. 1-ranked teams during the regular season with its upsets of Georgia and Alabama. Yet the Tigers watched their biggest rivals square off in the national championship game after being dominated by the Bulldogs in the SEC championship rematch.

Still, Auburn got an SEC Western Division championship out of it as part of a 10-4 season that resulted in a seven-year contract extension for coach Gus Malzahn. Nearly half the starters on that team are preparing for their first NFL training camp, so there’s plenty of talent to replace if the Tigers want to repeat their division title run.

But Auburn has experience back at some key positions on a team that finished in the top 30 nationally in total offense and defense, one of just two SEC teams to do that. Ole Miss will take on this year’s version of the Tigers at Vaught-Hemingway Stadium on Oct. 20 looking to end a two-game skid in the series.

Quarterback Jarrett Stidham gave the NFL some thought before deciding to come back for his senior season. The Baylor transfer threw for 3,158 yards and 18 touchdowns with six interceptions while completing nearly 67 percent of his passes in his first season for the Tigers, though keeping him upright was a chore at times for an offensive line that has to find four new starters after allowing 36 sacks last season — second-most in the SEC.

Second-rounder Kerryon Johnson and his SEC-leading 18 rushing touchdowns are gone as is Kam Pettway, but chances are good Auburn will find its 10th straight 1,000-yard rusher in a backfield still full of capable options. Junior Kam Martin was the Tigers’ second-leading rusher a season ago, averaging 6.1 yards on his 74 carries, and will compete with sophomores Malik Miller and Devan Barrett, freshman JaTarvious Whitlow and four-star signee Asa Martin to be the primary ballcarrier.

The Tigers could lean more on the passing game this season with more seasoned players out wide. Auburn returns its five leading receivers from last season, including SEC receptions leader Ryan Davis. Speedster Eli Stove (three career rushing touchdowns) and senior Will Hastings are each working their way back from ACL surgery.

Yet despite losing five defensive starters to the NFL, Auburn’s strength may again lie with a unit that finished in the top 35 nationally in total defense, scoring defense, pass defense, rush defense and sacks under second-year coordinator Kevin Steele.

Most of those departures came in the back seven with cornerback Carlton Davis and safeties Stephen Roberts and Tray Matthews no longer around, leaving one of the SEC’s top defensive lines largely intact. Senior Dontavius Russell and 330-pounder Derrick Brown anchor the group on the interior after combining for 15.5 tackles for loss last season while former five-star recruit Marlon Davidson is back for his third year as a starting end after notching 6.5 tackles for loss and 3.5 sacks a season ago.

Auburn has to replace rush specialist Jeff Holland at the other end spot, something the Tigers are trying to do with former four-star signees T.D. Moultry and Big Cat Bryant. Leading tackler Deshaun Davis and Darrell Williams are back at linebacker while corners Jamel Dean and Javaris Davis, who combined for 14 pass breakups last season, return in the secondary.

The Tigers also had one of nation’s top special-teams weapons in kicker Daniel Carlson, but the SEC’s all-time leading scorer is now with the Minnesota Vikings. His brother, Anders, is in the mix to replace the three-time Lou Groza Award finalist.