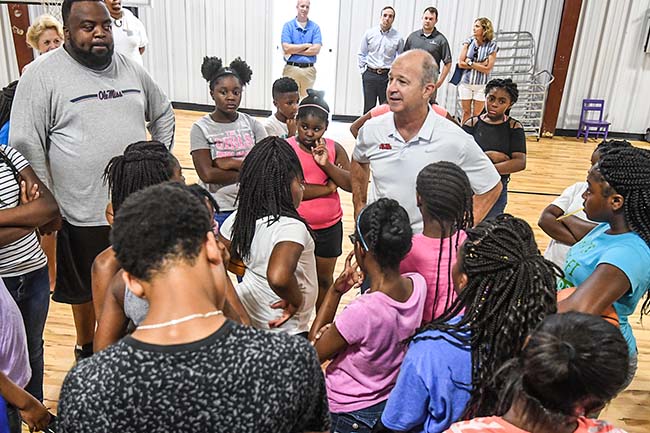 Mike Bianco didn’t have an excuse this year. Not that he was necessarily looking for one.

Ole Miss’ baseball coach will trade his uniform for a pair of dancing shoes next month when he participates in Dance Like The Stars, a fundraising event. Bianco is one of 10 celebrity dancers that will pair with a professional dancer to take part in a ballroom dancing contest on Aug. 11 at the BancorpSouth Center in Tupelo as part of the 13th annual event benefiting the Boys & Girls Club of North Mississippi.

For a coach who had no formal dancing experience until a couple of weeks ago when he started practicing for the event, it’s like trying to speak a different language.

“I’m 100 percent nervous about it,” Bianco said during a visit to the LOU Barksdale Boys & Girls Club in Oxford on Thursday. “A lot of people probably can relate. A lot of people that I’ve asked to donate are going, ‘Better you than me.’”

Bianco was originally asked to participate in the event last May, but he was recovering from a stress fracture in his foot at the time. Bianco was more open to the idea when approached again this year, though it still took some convincing to put himself that far out there.

It came in the form of perspective after talking with club representatives and his wife, Camie, who didn’t give her husband much of a choice now that he’s got two healthy feet.

“I really didn’t have an excuse then,” Bianco said with a grin. “That’s when my wife said, ‘No, you have to do it.’ If you know me, I usually do what my wife tells me to do.

“At first, I wasn’t real excited about it, but I learned quickly that it’s not about you. It’s about the kids. Instantly, that kind of slaps you back into reality. Even though I’m doing something maybe that is out of my comfort zone, what a great cause. And it is all about the kids. That’s why I’ve chosen to do this.”

Bianco’s dance partner is Tammy Wilson, manager and senior instructor at The Dance Studio in Tupelo and Oxford. The two practice two or three times a week with each session lasting a little more than an hour, a routine that didn’t start until late June with Ole Miss’ season extending into the first week of the month in the Oxford Regional.

The pair started with the basics, which Bianco admitted were stressful since he wasn’t even sure where to position his feet or in what direction to move during the routine. But progress has been made to the point that Bianco and Wilson got through their full routine with minimal missteps during Wednesday’s session.

“They make it look so easy in the way they move around on the floor, and you’re just trying to put your foot in the right spot,” Bianco said. “Sometimes I forget, but now I’ve gotten to the point where I think I pretty much know the dance. Now probably the most difficult thing is going to be to look halfway decent at it. Now I know what I’m supposed to do and where I’m supposed to go. Now can you look more like a dancer and less like a baseball coach?”

As for exactly which dance Bianco and Wilson will perform — the waltz, the foxtrot, the tango and the cha cha are among the possibilities — Bianco said that won’t be revealed until the pair takes the floor for their routine. Each routine will be rated by a panel of three judges.

Whichever routine is voted the best will be crowned dance champion while the dancer that raises the most money will be deemed the grand champion, which is what Bianco wants to win if he wins anything for a Boys & Girls Club of North Mississippi that promotes academic success for hundreds of children, teaches character and citizenship through community service projects and discourages substance use through prevention programs. The LOU Barksdale Boys & Girls Club served 662 children by itself last year.

The event, which includes a silent auction, raised approximately $203,000 last year while the grand champion raised nearly $40,000. Any donations made in Bianco’s name will go directly to the LOU Barksdale Boys & Girls Club to fund scholarships and strengthen programs that help children increase academic performance and healthy lifestyles.

“Of course I was worried about the dancing and all of that and still am, but really my focus has been the fundraising,” Bianco said. “The focus has really been that we’ve got to get people to donate.”

Donations on Bianco’s behalf as well as ticket purchases for the event can be made online at www.bgcnms.org.

Which players will represent Ole Miss at SEC Media…