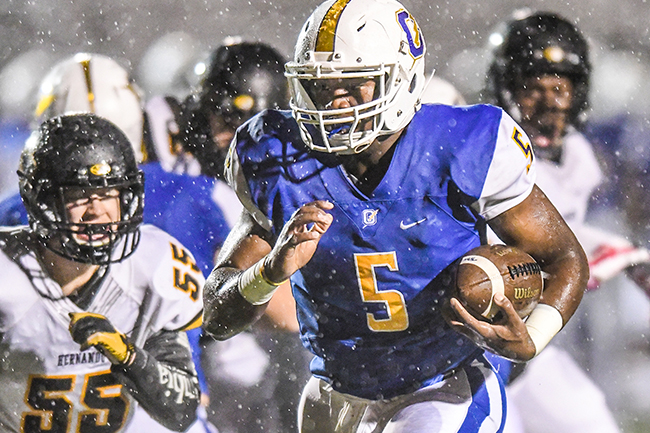 The 2018 football season is almost upon us, with high school games beginning on Aug. 16. For Oxford and Lafayette it will be their second run through Class 6A and 5A, respectively. For Water Valley it will be a chance to keep hold of the momentum that the Blue Devils gained during a 2017 season.

With a month remaining before teams kickoff their march to the 2018 MHSAA state championships at Southern Mississippi’s M.M. Roberts Stadium in December it is time to examine key games on the Chargers’, Commodores’ and Blue Devils’ slate.

Oxford
After missing the playoffs for only the third time since 2000 due to a disappointing 2017 season the Chargers look to get back to the postseason and their winning ways. It will be a tall order, going against the best in the state and a schedule that includes eight opponents who reached the playoffs a year ago.

Of the eight teams who earned a postseason berth in the north half of the 6A bracket Oxford will play all but two of them this season. Four of them are Region 1-6A opponents in Southaven (Sept. 21), South Panola (Sept. 28), Horn Lake (Oct. 12) and Tupelo (Nov. 2). Oxford will open region play against Southaven and close the regular season out once again versus the Golden Wave.

The other two postseason teams are the first two opponents on Oxford’s schedule. The Chargers kick things off against Warren Central in the annual Red Carpet Bowl. The game will be played at Vicksburg High School on Aug. 17 at 6 p.m. The ‘Little Egg Bowl’ rivalry will be renewed the following week with Oxford hosting Class 6A runner-up Starkville.

Other key non-division games include trips to Grenada and Pontotoc, keeping up the Highway 6 rivalry after renewing it a season ago. The ‘Crosstown Classic’ will take place on Sept. 7 with the Chargers hosting in-town rival Lafayette.

Lafayette
Coming off their 2016 state championship run the Commodores had a rough time fitting into their new home in Class 5A, failing to make the playoffs in 2017. If Lafayette wants to get back to playing football in late November they will need to improve on their 3-4 record in 1-5A from a season ago.

Doing so will take defeating the two-time defending Class 5A champion West Point. The Commodores will open up region play against the Green Wave on Sept. 21 after a bye week following their game with Oxford. West Point is not the only playoff team on Lafayette’s schedule. The Commodores will take on six other postseason teams from 2017, beginning with Cleveland Central at home in the season opener.

Water Valley
The Blue Devils had a much better 2017 campaign, making it to the second round of the Class 3A playoff before falling to eventual 3A runner-up Yazoo County. The 2018 schedule looks very similar to last year’s slate which could bode well for the Blue Devils who finished with a 4-1 2-3A record.

A home game against Winona will kickoff the season followed by the annual Railroad Rivalry game at Coffeeville on Aug. 24. Other non-region opponents include J.Z. George, Bruce, Calhoun City and Winona.

Water Valley will open up region play at Holly Springs on Sept. 28 and close out the regular season at North Panola on Oct. 26.

Oxford, Water Valley better each other with joint summer…