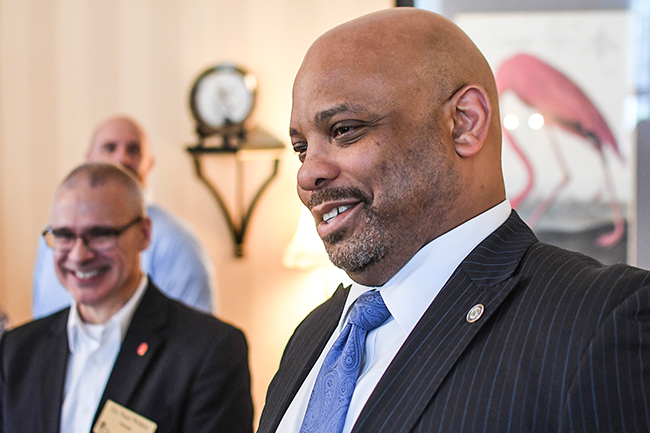 Al Rankins, Commissioner of Higher Education, visits with Ole Miss staff during the Commissioner’s Listening Tour, at the Lyceum in Oxford, Miss. on Tuesday, July 17, 2018. Rankins visit all eight public universities and the University of Mississippi Medical Center. In all, he will visit 13 campuses in 12 cities during his first 100 days in office.

Rankins has been a part of the IHL since 2008 and in the higher education field even longer, and said his goal throughout the listening tour and for his new role is to effectively share the story of Mississippi’s universities.

“We don’t tell our story enough about how impactful our universities are to this state,” Rankins said. “I want to be a strong advocate for the University of Mississippi and our other university.”

Rankins, who began his day in Oxford at the Lyceum and went on to speak with the Oxford Rotary Club, said he hoped to set a precedent for open, honest communication about the needs of Mississippi’s universities. In particular, a recurring concern Rankins said he planned to address is the need for more state funding for higher education.

“Certainly, myself as commissioner and the university presidents, we work very hard during the legislative session to garner support for our universities. Unfortunately, in recent years, because state revenues have been on a downward trend, that has forced us to make some tough decisions,” he said. “The good news is, the latest revenue report showed that revenue collections came in above the estimate, so that’s positive. As the economy improves here in the state, I think that we will receive more funding from the legislature.”

Rankins went on to say he believes legislators are fair in appropriating funds for higher education, considering the amount they have to work with, and that they clearly understand the value of the state’s universities.

Another topic Rankins said he planned to tackle is the so-called “brain-drain,” wherein students will earn their education in-state and then go elsewhere for employment. As part of the IHL’s three major arms – teaching, research and service and outreach – Rankins said sharing the message that basic and applied research in the state’s universities can be transformed into economic development will be key.

“I’m so very proud that our universities, including the University of Mississippi, have a small business incubator unit that supports the development of small business and entrepreneurship,” Rankins said. “We’re going to continue to sell that message of how important the University of Mississippi is as an economic development engine in this region and in this state.”

Part of Mississippi’s story, Rankins said, is that its universities are a net importer of students, where many other states are net exporters – something that illustrates where higher learning in the Magnolia State stands in the minds of parents and prospective students.

By expanding the IHL’s focus beyond in-state students, Rankins said Mississippi’s universities will be seen as a global participant in higher education.

“Part of why I’m going on this tour is to arm myself with the ammunition needed to aggressively promote our universities,” he said. “We need to drive the narrative and tell our own story about the great things that are going on in our campuses and in our state and don’t let the negatives dominate the conversation. I want to be a cheerleader for the university and a strong advocate, and help sell the message about how great an institution the university is.”

GoFundMe for fire victims raises over $16,000 and counting