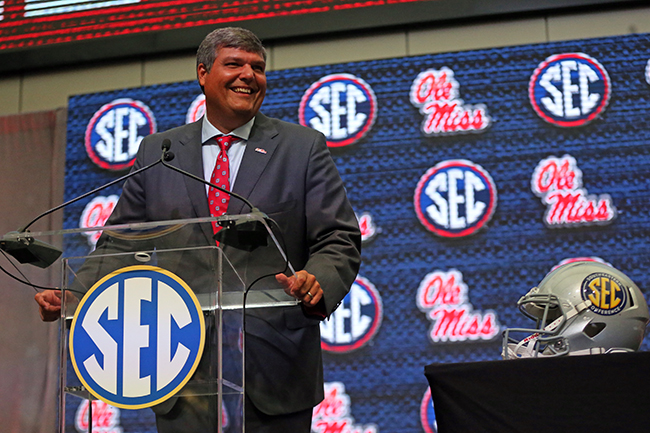 The media don’t expect Ole Miss to make a move in the SEC this season.

The defending national champions were also pegged to win the SEC championship, receiving 193 votes. Georgia, the defending league champion, received 69 votes to repeat while Auburn was next with 14 votes. Only six times since 1992 has the media correctly predicted the league champion.

Ole Miss finished sixth in the division last season after going 6-6 with a 3-5 mark in SEC play. The Rebels, who are entering the first season of the Matt Luke era, have combined for five conference wins the last two seasons.

The Rebels, who return 16 starters (10 offense, six defense), will start fall camp early next month before opening the season against Texas Tech in Houston on Sept. 1 (11 a.m., ESPN).

The first-team selections of Brown and Little weren’t surprising. Brown set a single-season school record with an SEC-leading 1,252 receiving yards last season while also tying the school record with 11 touchdown receptions. A former five-star recruit, Little has been entrenched as the Rebels’ left tackle since grabbing the starting job midway through his freshman season.

Both are widely projected to be top-10 picks in next year’s NFL Draft.

One of the veterans of an offensive line that returns all five starters, Patterson enters his final season with 30 career starts. Most of those have come at left guard while he’s also drawn starts at right guard and center.

See the complete predicted order of finish and preseason All-SEC teams are below.

What is Ole Miss’ plan to improve its porous…