What is Ole Miss’ plan to improve its porous run defense? 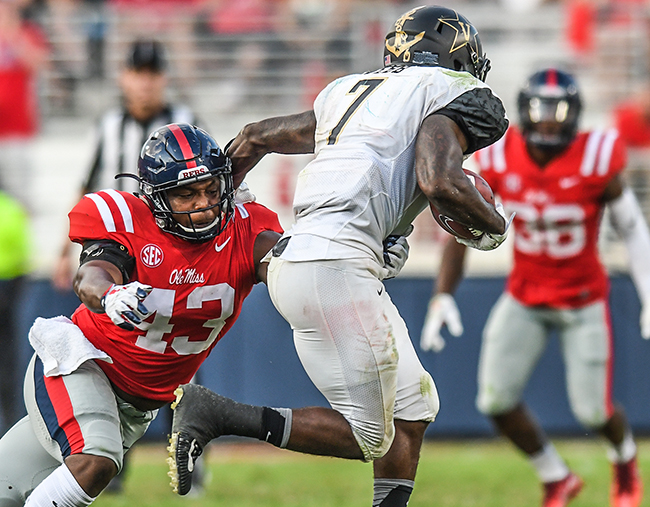 Matt Luke stood in front of local reporters in the Lilac Suite at the Omni Atlanta Hotel to start his appearance at SEC Media Days earlier this week. Among the questions Ole Miss’ coach answered for more than 10 minutes were Jordan Ta’amu’s development at quarterback, the pecking order at running back, options in the secondary and a couple of signees he’s still waiting to arrive on campus.

Then came the question he knew was coming, an overriding inquiry he was almost waiting on as it pertained to the Rebels’ defense: How are you going to stop the run?

“That’s kind of the elephant in the room,” Luke said.

It’s been there for the better part of three years as Ole Miss continues to try to fix the part of its defense in desperate need of repairs.

Since finishing in the top 25 in rushing yards allowed in 2015, Ole Miss has been among the nation’s worst units in that category, plummeting to 120th in 2016 before falling to 123rd last season. Ole Miss has allowed more than 245 yards on average in each of those seasons while yielding the second-most yards per rush in the SEC.

It goes without saying Ole Miss will need much more resistance on the ground to give itself a realistic shot against some of the league’s better competition. The Rebels won just once against the SEC West last season (Mississippi State) and were outscored by the top three teams in the division standings — Auburn, Alabama and LSU — a combined 150-50 on the way to a 3-5 conference record.

“To win in this league, you have to be able to run the ball and you have to stop the run,” Luke said.

Will that happen for a defense that’s returning much of the same personnel this fall? That remains to be seen, but Ole Miss is devising a plan.

It starts with continuity, Luke said, despite the fact the Rebels lost three of their most productive players in the front seven in Breeland Speaks, Marquis Haynes and DeMarquis Gates, Ole Miss’ leading tackler the last three seasons. Ole Miss still has more than half its starters back from a defense that’s had a full season and two springs in Wesley McGriff’s 4-2-5 scheme, which should help with learning the intricacies of a defense the Rebels’ second-year coordinator simplified at times last season with players being out of position too often.

“Physically everybody was there,” defensive tackle Josiah Coatney said. “We played hard, and we gave great effort. It’s just knowing the plays, executing the plays and providing that leadership.”

Coatney (65 tackles, eight tackles for loss) was Ole Miss’ most productive lineman other than Speaks a season ago and will join junior nose tackle Benito Jones to anchor the Rebels up front while a strong spring vaulted senior Detric Bing-Dukes (eight career starts) back to the top of the depth chart at middle linebacker. Redshirt freshman Josh Clarke will get the first crack at replacing Gates on the outside, one of the many young linebackers that could be a heavy part of the rotation at a position where no returning player had more than 24 tackles last season.

Improvement in the front seven is a must, but the Rebels are thinking of ways for an experienced secondary to help. Despite the transfer of former top recruit D.D. Bowie, Luke said he likes the mix of depth and talent at cornerback with four upperclassmen in the two-deep led by fifth-year senior Ken Webster and Jaylon Jones. Myles Hartsfield, Javien Hamilton and freshmen JaKorey Hawkins and Keidron Smith are other options there.

Being able to leave them on an island would allow Ole Miss to creep a safety or two closer to the line of scrimmage, leaving offenses to either run against more bodies at the point of attack or go away from it all together to test the coverage on the back end. Nickel Vernon Dasher, who played linebacker in junior college, is an ideal candidate.

“I think we’re going to find creative ways to load the box — different ways, different angles and just put pressure on offenses and make them throw it over the top to beat us,” Luke said. “I think if we do that and we continue to make people throw the long ball to try to beat us, I think that will bode well for us.”