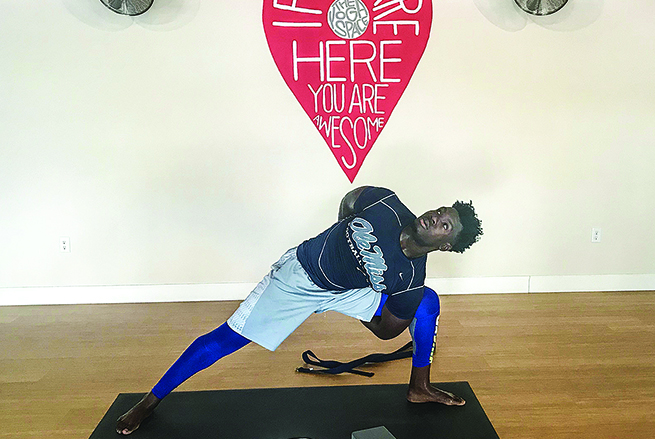 Eric Jeffries attends yoga classes three times a week at The Yoga Space. It has helped the Lafayette Commodore work his way back from injury ahead of his senior season.

Lafayette kicks off their season on Aug. 17 and it will be the first time Eric Jeffries will play a down of varsity football. Jeffries was hurt during his years at Oxford and then transferred to Lafayette, forcing him to sit out last season. Now in his senior year, Jeffries is fully healthy and more agile than he has ever been before.

He can thank yoga — and Mary Morgan Bryan — for that.

Jeffries discovered the art of yoga back in the Spring when his hips were feeling tight after workouts. His mother had an-out-of-the-box idea for her son to try.

“Being a football player you need loose hips and so my mom was like, ‘yoga,’” Jeffries said.

After doing some searching around Oxford Jeffries found The Yoga Space, a new yoga studio located just off the Square that was opened by Bryan in February. The thought to try yoga had never crossed Jeffries’ mind before but he decided to give it a shot and immediately fell in love.

“(Bryan) was so welcoming and had good people skills, so I was blown away by that,” Jeffries said. “I felt like I made it through (the first class) and did pretty good. It was intense. It was harder than (football) practice. People think when you do yoga that it’s easy. It’s not easy.”

After the first class there was no apprehension  of coming back for a second. Now, Jeffries attends yoga classes up to three times a week.

Shortly after beginning the classes, Jeffries began to feel the affects and could start seeing the results with the way his body was responding to the poses Bryan would have him do. It was just as intriguing for Jeffries to be trying yoga for the first time as it was for Bryan to watch someone of Jeffries’ 6-foot-3 stature taking to it so quickly.

“It was interesting for me to see just from having practiced yoga myself for a while and then to see (Jeffries), obviously a larger person, be so muscular and strong,” Bryan said. “I actually thought it would take him longer because he had really tight hips. I was surprised by how fast he started to see differences in his hips and through his shoulders.”

Once Jeffries was getting into a routine of coming to yoga classes an injury derailed his progress. After some time away from the studio Bryan got a call from Jeffries who was itching to come back and work on his lower body that had grown stiff from missing classes. The two worked on a way for him to still do yoga and not further aggravate his upper body injury.

Jeffries is not the only athlete to frequent Bryan’s studio. He once brought Ole Miss linebacker Mohamed Sanogo to a class. Jeffries noted Sanogo was confident heading into the class but had a different attitude when they walked out.

“He thought he was about to crush it then he went to the back of the class and died,” Jeffries said laughing. “He got real humbled.”

Sanogo has not returned.

Other Ole Miss athletes have tried their hand at Bryan’s classes, including women’s golfer Connor Beth Ball who has used it to help improve her swing and open her hips up.

Yoga is not a short-term endeavor for Jeffries. He is graduating in December with plans to early enroll at whichever college he chooses. Even if he is not living in Oxford, Jeffries plans to continue incorporating yoga into his life.