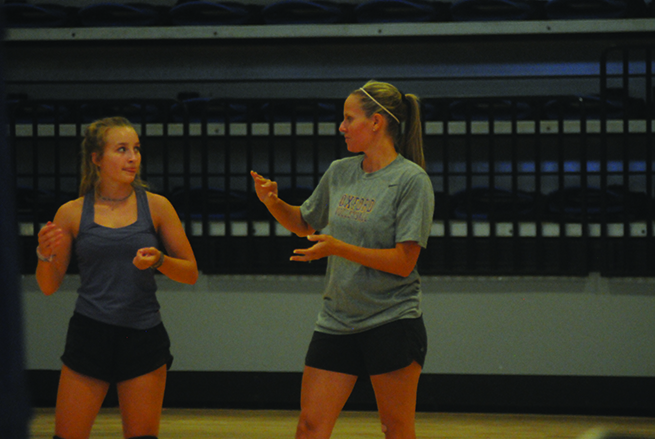 This time a year ago Kacie Hengler was entering her first season as head coach of the Oxford volleyball team. She had only been on the job a couple of months. Hengler was hired in May 2017 when former coach Tara Ross stepped away after the Chargers won the 2016 Class II state championship.

There was not much time for Hengler, who had been helping coach the Oxford Premier Volleyball club at the time, to adjust to her first head coaching job at the high school level. Before moving to Oxford, Hengler had coached junior high teams as well as assisted with a varsity team during her time in California. Last season was her first time having control of her own varsity-level team.

“There’s just so much more behind the scenes,” Hengler said. “It’s faster paced. You’re in the gym every single day whereas as a club you’re only in the gym a couple days a week. You’ve got a lot to work on and a lot more team-oriented stuff and you’ve got to make sure everyone’s on the same page. …it’s just a different dynamic. I guess the biggest thing I learned over last year is just how to prepare for the next game when you play so many back-toback.”

What Hengler did not know then she knows now. Entering her second season with the Chargers Hengler feels more prepared to be at the helm now that she has an entire offseason under her belt. She did not need the experience to better her coaching skills on the court. Instead, Hengler was playing catch up to the off-the-court duties a high school coach must do in between practices and games.

“It’s never easy, I guess. It’s still a lot of work, but it’s just so much easier knowing what I need to have done this year,” Hengler said. “Last year, every week I was finding out something new that we were supposed to have been doing or done.”

Knowing what is expected of her in all facets of the job has helped Henlger feel more at ease entering the 2017 season. She is also beginning to leave her mark on the program. In late June, Oxford held their first alumni game welcoming back former Chargers to play against the current roster. It was a success and laid the groundwork for the to become a yearly event.

“That was a lot of fun. We actually had a good turnout,” Hengler said. “The alumni had a great time and it was just really good to see everybody again and it was also good really early on to see how our team was looking and what we need to work on this season.”

Hengler is already looking to the future of the program. With 55 girls trying out for the seventh grade team and 35 for the eight grade team, she wants to implement a freshman team next season. It would create three teams at the high school level, joining the junior varsity and varsity squads. Hengler has already begun talking with other coaches about adding ninth-grade games to the 2019 schedule.

Oxford begins their season on Aug. 6 when they play at crosstown rival Lafayette.