‘Tough schedule’ to prepare Lafayette for another postseason push in 2018 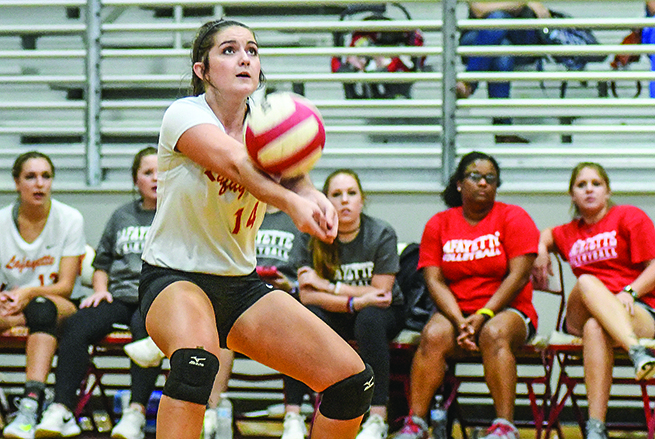 LLafayette’s Madison Daniels (14) volleys during their match against Water Valley in Aug. 2017. Daniels is one of five Commodore seniors this season.

Lafayette got their first taste of Class 5A volleyball last year, coming away with some success while also taking their lumps. Moving up from 4A a season prior, the Commodores stayed in Class II but the level of competition rose over the course of the season and in the postseason.

For most sports it was a new environment but with familiarity of their competition, volleyball took advantage and came away with the Class II-Region 4 title. The Commodores tied Caledonia with a 7-1 region record but claimed the tiebreaker with a win over the Confederates.

Caledonia will once again be a contender for the region title along with Pontotoc, New Hope and Amory but Lafayette is confident on the chances of successfully defending their championship.

“I’m very aware,” Lafayette head coach Clint Jordan said of the region opponents returning this season. “Pontotoc didn’t lose much. They’re going to return two starters and two role players who are as good as the people they’re losing. They’re going to be much improved. …Caledonia will be Caledonia. They’ll be well coached. They’ll not have any weaknesses. I do believe they lose more of their important players but they have two impact players coming back.”

Along with the tough region schedule, Jordan put together another competitive non-region slate this season. Lafayette will begin the year against Oxford (Aug. 6) and will also face Ripley, Lewisburg, Corinth and Tupelo throughout the season. Lafayette will see Oxford, Tupelo and Ripley twice. The Lady ‘Dores are also going to take part in the annual Set It Off tournament that is held in Ridgeland. The tournament takes place the first weekend of the season and features some of the top teams in the state. Jordan also has his team competing in Tupelo’s Volleyfest tournament in late Sept.

“I’ve always put a schedule together that kind of reflected the fact that we were 5 or 6A,” Jordan said. “I believe in playing the Tupelos and Southavens. Unfortunately, Southaven couldn’t work out a date this year but we have Lewisburg and Lake Cormorant and Oxford. We play a tough schedule and we play it on purpose. Our record will reflect that we’re playing a tough schedule and you’ll see us get better as the year goes along.”

With a schedule full of playoff teams looming, Lafayette will be battle tested and poised for a deeper run through the postseason.

The Commodores edged past Corinth in a dramatic five-set win in the first round of the Class II playoffs last year. The win was followed up with a three-set shutout by Lake Cormorant on the road in the quarterfinals.

A potential key road game in the postseason will more than likely happen for Lafayette this year, and Jordan wants his team more prepared than they were a year ago when walking into Lake Cormorant’s gym.

“We went to Lake Cormorant and took our lumps. We really did,” Jordan said. “We knew that that was a distinct possibility because anytime you play (Lake Cormorant at home) it’s a long drive. It’s a volleyball school and when you go in their gym you find out why.”