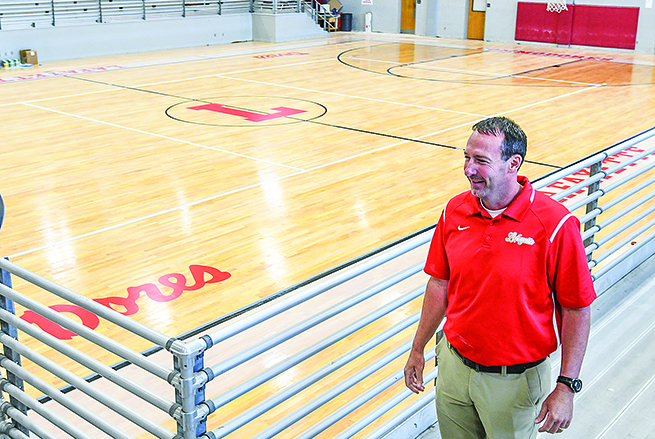 When Greg Lewis stepped down as head coach of the Lafayette baseball team the first time it was a move he was not prepared for. When Lewis did it again last year to become the school’s newest athletic director there was no sadness in his decision.

“When I walked away from baseball the first time, it hurt walking away,” Lewis said. “I wasn’t quite ready or anything. Not that I was ready even the second time because you’re still going to love the game no matter what you do. (I was surprised) how much I’ve enjoyed this part of it. It’s been fun.”

Lewis took over as Lafayette’s athletic director in July 2017, replacing Gary Drewery who retired at the end of the 2016-17 school year.

Lewis was equipped to be in charge of the athletics department, having been the assistant athletic director under Drewery the previous three years.

A year into his new job, Lewis is happy with the progress that has been made in the athletic department, including the way teams are working hand-in-hand with other teams at Lafayette.

“I was talking to some people at the last (athletic directors) conference and one of their toughest things is to get coaches to share players or work together. That’s happening (at Lafayette) right now,” Lewis said. “I’m sure we’re going to have bumps and that’s going to happen with things, but our coaches work together and try to get things done (right now) and players are helping out other sports.”

When Lewis became athletic director he had a fear that there would be a disconnect between himself and the teams and players that he’d been around for years as a coach. The fear was taken away immediately once the school year began.

There was also the surprising amount of free time available to be able to spend with his family.

The biggest hurdle in Lewis’ first year was getting Lafayette prepared for the move up in classification. The Commodores competed in Class 5A for the first time in school history last year.

The preparation was not as intense as it could be for schools were expecting to be reclassified. Lafayette had already put plans in place before they knew they’d become a 5A school.

Lewis was able to usher in historic firsts for the school with Lafayette winning Class 5A state championships. The biggest feather in Lewis’ cap last school year came from the tennis program when they won the Class 5A team state championship. It was also the program’s first tennis state title in any classification.

“I felt like we did a good job (in 5A),” Lewis said. “All of our teams were prepared. The injury bug got us probably in two or three sports that we didn’t really anticipate. As far as being ready, and I feel (Drewery) had been saying this for two or three years, ‘we got to start getting ready for 5A.’ I felt like we were getting prepared. I think this year you’ll see that jump where all teams are in the playoffs.”

Lewis’ mark is already being left on the athletic department with the renovations and additions to facilities that have taken place over the past couple months.

One of the largest video boards in the state was installed on the football field last May and the football program is raising money to build a new field house. The design has already been picked out and will begin construction once the funds are in place.

The middle school gym had air conditioning installed and the high school gym’s floor was refurbished with a new design scheme.

“I want to continue to push to do things,” Lewis said. “I don’t want our coaches to feel pressure but I want to see that improvement and I want to see the same thing out of me. I want to see what we can do to improve. What can we do for our student body to make all of them a part of everything that we’re doing?”

‘Tough schedule’ to prepare Lafayette for another postseason push…