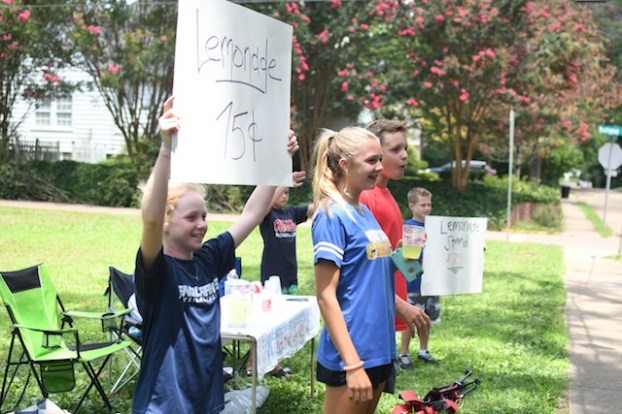 With the dog days of summer officially set in, many young entrepreneurs are reverting to a time-honored tradition of opening lemonade stands to enhance their allowance and quench the thirst of the masses.

For OPD Officers Scott Hollowell and Jason Dyer, stopping by a lemonade stand is about more than getting a cool drink. Over the past week, the two officers have made it a point to visit with kids in the community, documenting the various stops on the OPD Twitter account.

“I just enjoy stopping by and hanging out with people in the community. I’m from here, so it’s kind of a big deal to me,” Hollowell said. “It not only brightens their day, but it brightens our day as well.”

Dyer agreed, saying the more visible he and his fellow officers are in the community, the more likely it is that residents will cooperate and respond positively to them. Plus, he said, seeing the smile on a child’s face when he and his K9, Kiera pull up is priceless.

“It really helps to build a rapport with the kids. They don’t look at you like, ‘Oh, it’s a cop, he’s bad,’” Dyer said. “The kids were excited. When we got out of the car they jumped up and asked, ‘How many cups do y’all want?’ and the whole nine yards.”

Both Dyer and Hollowell said it’s not uncommon to see officers helping people out in the community, whether it’s changing a tire, giving someone a ride or simply stopping on the side of the road for a chat.

It’s something they’ve always done, Hollowell explained, but with the advent of social media and the popularity of OPD’s Twitter account, good deeds are becoming more visible.

“Stopping at a lemonade stand is not something we just started doing. We’ve been doing it forever, but when people see it on social media, they realize, ‘Hey, the cops aren’t just out there writing tickets and arresting people,” Hollowell said. “They’re stopping by, talking to the little girl or little boy selling lemonade and learning how to operate a business. And it’s a good time for us. I enjoy it.”

HomeGoods will be the latest major retailer to enter the Oxford retail market. The new store will be located in... read more