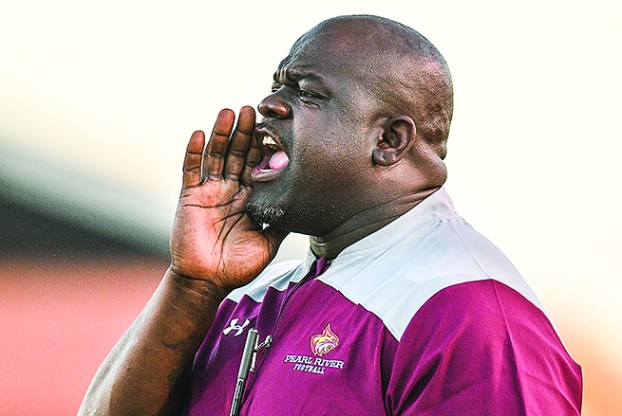 Terrence Metcalf is a man who has worn many hats in recent years, some at the same time.

He’s a family man, a coach on the rise at Pearl River Community College and recently returned to the classroom. Metcalf earned his masters degree in inter-scholastic administration at William Carey University this month.

Somehow the former Ole Miss Rebel managed to balance it all.

“It was a little tough at times,” Metcalf said. “But, just like we preach to the student athletes here at Pearl River and everywhere else, you just have to make sure you manage your time and limit distractions. It made me focus up and walk the walk that I’d been preaching to these kids. …I had to make sure I was ahead of the schedule as far as what I needed to have done as a coach, so at night time I could work on those papers and do the discussion questions and things like that.”

Metcalf enjoyed coaching the Chargers during his son’s senior season and it was no surprise to Oxford head coach Chris Cutcliffe that colleges came calling for Metcalf’s services after one season on his staff.

“(Metcalf) was great to have with us,” Cutcliffe said. “His knowledge of the game is incredible. I definitely learned from being around him. He’s seen it at the highest level.”

Metcalf, who played seven years in the NFL, took Pearl River’s offer and moved to Poplarville to join the Wildcats’ staff. A season prior, Metcalf was preparing players for the college level. Now, he was coaching them and saw more similarities than differences.

“It’s pretty much the same,” Metcalf said. “I do the same things with those guys that I did with the high school kids. It’s more so building the right attitude and getting them set on the right course for life than just coaching ball. It makes it an easy transition for me.”

Another aspect of coaching at the collegiate level is recruiting, which brings Metcalf full circle. Starting as someone who was recruited to preparing his children to deal with the rigorous process and seeing things through the eyes of the parent, to hitting the recruiting trail himself.

The task was not one that seemed daunting to Metcalf, who relied on a wealth of personal experience and knowledge gained to mold the kind of recruiter he wanted to be while sitting in families’ homes.

“I’ve always been able to talk to kids on that level as far as like where they’re going to go to school,” Metcalf said. “From being at Oxford High School, year in and year out we had guys getting ready to move on to the next level of college football and they had questions. I kind of developed a style from what I experienced as a player. What I didn’t like, what I didn’t want to say to a kid. Just being honest and telling people the truth.”

With a son playing in the Southeastern Conference, and at his alma mater, Metcalf tries to attend as many Ole Miss games as possible. Most junior college football games are played on Thursdays, which makes it easier for him to get to Oxford or wherever the Rebels might be playing. But Pearl River does have a handful of Saturday games on their schedule, including the final three games of their regular season this year.

Metcalf has a contingency plan in place to still make sure he knows how D.K. and the Rebels are doing.

“My wife, Tonya, is at the game so I get up-to-date information even if we’re playing a game,” Metcalf said. “As soon as I get off the field I’m updated on exactly what’s gone on or what’s going on at the time. I can be there as much as I want to be. If our game’s schedule doesn’t conflict with Ole Miss I go to every game. I don’t miss a game.”

The Mississippi High School Activities Association (MHSAA) is stepping into the 21st Century. On Wednesday the MHSAA announced the addition... read more