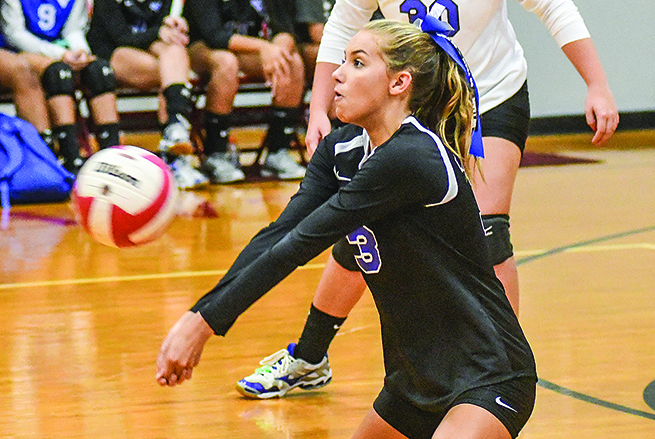 Water Valley’s Molly Todd is one of four seniors who have played under McCain all three seasons. (Bruce Newman)

Practice for the upcoming volleyball season has been happening for a week and Allison McCain is one week into her third season at Water Valley.

Since being hired in 2016, McCain is beginning to see the program head in the direction she is wanting it to go.

“I think every year it’s just getting better,” McCain said. “We’re improving more and more and they know what I expect and they expect more and more. (The players) want better for not only themselves but for each other. Everything’s working out how I’d want to see.”

Being the head coach of the softball team as well, McCain combined both worlds during summer workouts. The volleyball and softball team did joint workouts, which are the same as the girl’s powerlifting team.

Incorporating a more strength-based approach has made McCain see bigger, faster and stronger players take the volleyball court during the first practices of the year.

“I think we’re probably going to be in the best shape that we’ve been in since I’ve been here,” McCain said. “You can already tell from our hits and our serves alone how much better and how much stronger we are. We’re not getting tired. We practice for three hours a day and I could increase it to five and I think they’d be fine.”

Water Valley has made it to the postseaon in each of McCain’s first two seasons. A first round elimination in 2016 was followed up by a second round appearance in 2017 where the Lady Devils lost to Alcorn Central.

With a group led by four seniors who have played for McCain for three years, Water Valley is experienced enough to make a deeper run in the MHSAA Class I playoffs.

Finding themselves as one of the final four teams competing for a state title does not seem far-fetched to McCain.

“They have all have that mindset that they can make it further (in the playoffs),” McCain said. “We’ve played competitive against these teams and learning their weakness and trying to better ours.”

In trying to prepare her team and get them furthur seasoned heading into the October playoff run, McCain added some tougher competition to the schedule.

There are several first time opponents — under the McCain era — on the Blue Devils’ slate. They are there by design. Senatobia, Corinth and Oxford are key opponents.

Oxford is replacing Lafayette, who is normally on Water Valley’s schedule but due to scheduling conflicts were unable to find a date to play.

“I tried to add some stronger teams outside of our (region),” McCain said. “I try to go schedule these stronger teams like Pontotoc and Corinth. I’m real excited about the Oxford game. I think that’s going to be great competition for us.”

Water Valley will begin their 2018 campaign on Aug. 4 when they play in the Pontotoc Classic.