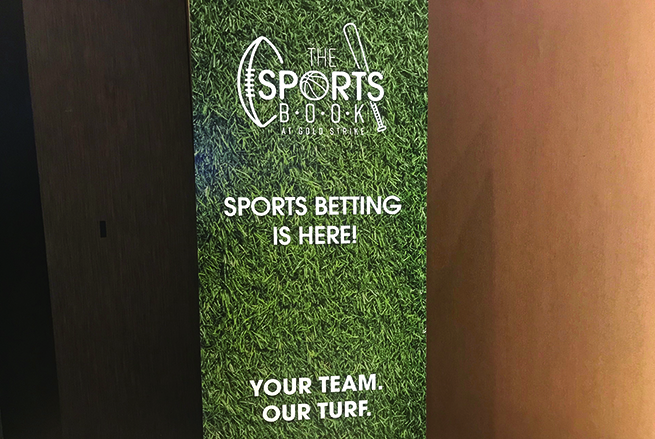 A sign is posted in Gold Strike Casino in Tunica, announcing the arrival of sports betting in Mississippi. (Jake Thompson)

The state began accepting sports bets at Noon on Wednesday in two MGM Resort properties, the Beau Rivage Resort and Casino in Biloxi and Gold Strike Casino in Tunica.

Ceremonies were held in each location, with Gold Strike having the grand opening of ‘The Sports Book at Gold Strike.’

“We really wanted to be first. Nothing beats being first,” Gold Strike president and chief operating officer David Tsai said. “I’m a big believer that you need to evolve with the times and you need to give the customers what they want. …I think sports betting is just another amenity that we can offer. I think as times continue to evolve that we’ll evolve, too.”

The U.S. Supreme Court struck down a decades-old federal ban on sports betting, ruling a 1992 federal law blocking sports betting outside of Nevada, Delaware, Oregon and Montana as unconstitutional in May. Mississippi is one of the first states to offer sports betting.

MGM Resorts has been accepting sports bets for over 25 years, accepting four million sports wagers a year and around $1 billion in sports bets, annually.

The historic day brought people all around Mississippi and surrounding states, wanting to be one of the first to place a bet on their favorite sports teams. Robert Newton drove over on Tuesday evening from Muscle Shoals, Ala. and was the first in line, betting on several Southeastern Conference football teams’ win totals for the year.

“This is great,” Newton said. “We’ll be here more now because we’ll come on a college football weekend. If Alabama’s playing away we’ll come here and sit in the sports book. We do this in Vegas for the Super Bowl and the Final Four, but now we don’t have to go Vegas. We can come here.”

The sports book is fully operational, taking bets on every professional sport as well as college football, basketball and baseball. Mixed Martial Arts and boxing is also available.

With Major League Baseball in full swing it allows the sports book to get ready for what will sure be a busy time come Labor Day weekend when college football’s season begins, followed shortly by the NFL season kicking off.

“We really ranted to make sure we had this up and running before football season,” Tsai said. “We do expect once football season comes around, especially college football, this place will get a lot busier. Not just for people coming down here to place bets on their favorite teams, but we hope they stick around and actually watch the game here with other sports fans.”