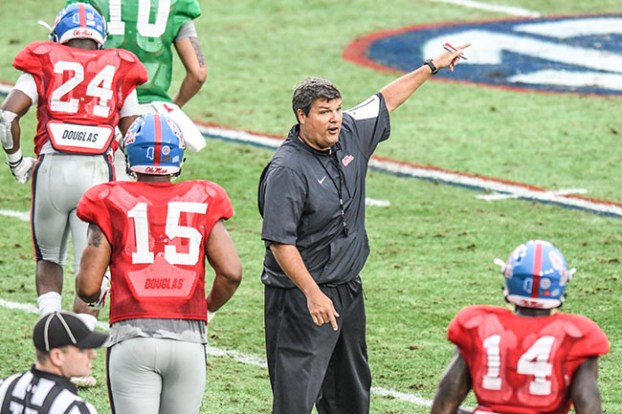 What to watch for in Ole Miss’ fall camp

It’s August, which means the offseason for Ole Miss and the rest of college football is over.

The Rebels will report for fall camp Thursday before going through their first practice Friday morning. As of now, nine practices are scheduled to be open to the media leading up to the first game against Texas Tech on Sept. 1 in Houston.

There are some things we know as Ole Miss starts preparing for the first season of the Matt Luke era (the Rebels are set at quarterback with Jordan Ta’amu, he has plenty of talented targets to throw to starting with A.J. Brown, and the offensive line should be one of the SEC’s best with all five starters back), but there’s still plenty for the Rebels to sort out over the next four weeks.

Here’s what to watch for during Ole Miss’ camp.

Ole Miss has to replace 1,000-yard rusher Jordan Wilkins, so the Rebels dipped into the junior college market and signed Scottie Phillips to help with that.

Phillips entered the backfield competition in the spring after rushing for more than 2,200 yards at Jones County Junior College the previous two seasons and showed enough to grab the top spot on the depth chart heading into the fall. Will the 5-foot-8, 212-pounder hold on to it?

The chances are good seeing how Phillips may already be the most talented runner on the roster and his competition includes a freshman (Isaiah Woullard) and a converted safety (Armani Linton). Junior D’Vaughn Pennamon is still working his way back from last season’s knee injury and won’t be ready until later in the season if at all, Luke said last month at SEC Media Days.

If anyone is going to legitimately push Phillips for the starting job, it will be Eric Swinney, who’s listed as Phillips’ backup on the updated depth chart. Swinney, the former four-star recruit who began his career with two season-ending leg injuries, made it through all of last season and the spring with a clean bill of health and seems primed for his biggest role yet at Ole Miss.

Senior D.K. Buford is also back to provide depth, so the Rebels have some options at a position Luke referred to as the most pleasant surprise for him in the spring.

Josiah Coatney and Benito Jones will anchor Ole Miss’ defensive line on the interior, but life after Marquis Haynes and Breeland Speaks on the edge isn’t as certain.

Outside of linebacker DeMarquis Gates, Haynes and Speaks were the Rebels’ most productive players on that side of the ball last season. The pair was also Ole Miss’ biggest threat to get to the quarterback, combining for half of the Rebels’ 29 sacks.

Victor Evans and Ryder Anderson will get the first crack at replacing the NFL draft picks. Evans, who started four games last season, is the most experienced of the group as a senior, though he’s been slowed by injuries.

Anderson doesn’t have that kind of seasoning yet as a sophomore, but coaches like the 6-6, 244-pounder’s potential as a player who’s rangy enough to help in pass-rush situations but also adding enough bulk to hold his own against the run. Anderson, who played in 11 games a season ago as a reserve, enters camp with a slight edge on the depth chart over Qaadir Sheppard, the former Syracuse transfer who began last season as a starter before a knee injury cut it short after three games.

Seniors Austrian Robinson and Markel Winters and converted linebacker Brenden Williams will also compete to be a part of the rotation at end.

Production at linebacker has been a running problem, and now Ole Miss has to find a replacement for its most productive one recently in Gates, who led the Rebels in tackles the last three seasons from his outside spot.

Detric Bing-Dukes is at the top of the depth chart again in the middle after his most consistent spring in his three years on campus, but the rising senior will need a strong camp to hold on to that spot. Bing-Dukes, who lost the job late last season to the departed Tayler Polk, has shuffled in and out of the starting lineup with eight combined starts the last two seasons.

Redshirt freshman Zikerrion Baker is pushing Bing-Dukes, part of a youth movement at the second level. Fellow freshman Josh Clarke passed Willie Hibbler on the depth chart in the spring on the outside while Mohamed Sanogo, another member of the 2017 recruiting class, is on track to join the rotation after playing in 11 games last year.

Of course, there’s always the new batch of recruits that could produce some immediate contributors this fall. Who are the most likely candidates?

Most are on the defensive side of the ball, though don’t rule out Woullard or receivers Demarcus Gregory, Miles Battle and Elijah Moore. Woullard, the all-time leading rusher in Mississippi high school football, impressed in the spring after grayshirting last season.

Ole Miss signed four linebackers in the incoming class. Of the group, don’t be surprised to see Kevontae’ Ruggs or Jacquez Jones make a push to be a part of the rotation. Junior college transfer Vernon Dasher went through the spring and ended it atop the depth chart at Star, the hybrid linebacker/safety position in coordinator Wesley McGriff’s 4-2-5 scheme.

Luke has spoken highly of the quality depth he thinks Keidron Smith and JaKorey Hawkins can give Ole Miss behind Ken Webster, Jaylon Jones, Myles Hartsfield and Javien Hamilton at cornerback. Tylan Knight, who was recruited as an athlete, could get a look at returning kicks depending on if the Rebels still plan to use Brown there.

ATLANTA — The final step in Ole Miss’ appeal of the sanctions handed down in its NCAA infractions case is... read more