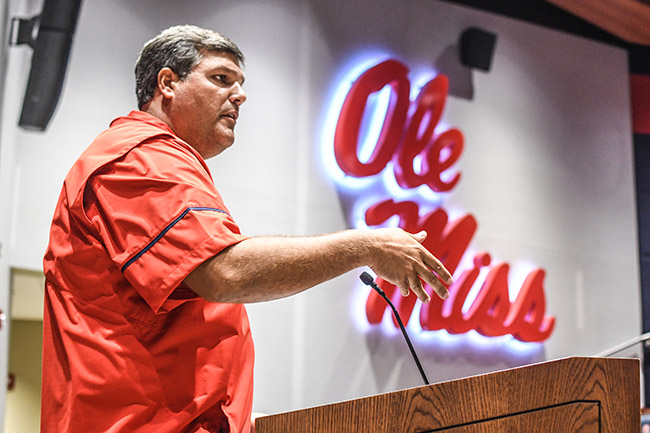 A year ago, Ole Miss was anything but stable.

The cloud of a long-running NCAA investigation continued to hover over the program as the Rebels awaited the final verdict. That was compounded by a sudden change at the top when Hugh Freeze forcibly resigned last July after a five-year tenure amid a female escort scandal.

Since then, Matt Luke, who went from the interim coach to the permanent gig after leading the Rebels to a 6-6 record last season, has had a full year to settle in. And while the final penalties include an additional bowl ban for this season, that NCAA cloud has evaporated.

When Ole Miss opens fall camp this morning, it will do so without all the drama that’s accompanied it in recent years.

“Taking all the positive momentum, focusing on football, focusing on the guys in this locker room and try to block out all the outside noise,” Luke said. “I think that’s the most exciting part.”

Ole Miss served a self-imposed bowl ban last season but still got to .500 by winning three of its last four games. The Rebels found a quarterback in the process in Jordan Ta’amu, who kept the SEC’s top passing offense humming once Shea Patterson went down with a knee injury and kept the starting job when Patterson transferred in December.

Ole Miss managed to piece together a top-35 recruiting class this year, a notable feat considering the NCAA’s final verdict came just weeks before the early signing period began in late December. The Rebels are working on a top-25 class for 2019 that already has 26 commitments — the most of any Power Five program — while the returning players are entering their second season in the same system under offensive coordinator Phil Longo and defensive coordinator Wesley McGriff.

The program is still waiting to hear on its appeal. Ole Miss had its in-person hearing with the Infractions Appeals Committee on July 18, though athletic director Ross Bjork said he’s unsure exactly when the committee’s final ruling will come other than it’s expected sometime this fall.

Should the bowl ban for this season get reversed, Luke and his players will view it as an added bonus to an environment that’s starting to feel normal again.

“It’s just been a big weight lifted off our shoulders to come in and know that’s done with,” running back Scottie Phillips said. “Just move on, move forward and worry about Sept. 1 (season opener against Texas Tech).”

The most pressing questions are on the field, particularly for a defense that’s struggled mightily the last two seasons. Ole Miss has allowed 34 points per game over that span and ranked 123rd nationally against the run last season.

A unit that has more than half its starters back could help the Rebels increase their win total with some improvement. Luke said familiarity should help with that.

“I think continuity is huge and being in the second year of the same system,” Luke said. “Everybody being one year better. I think having an experienced secondary and being able to load the box some should help us. We’ve just got to find a way to build and get better in our second year.”

For the first time in a long time, the Rebels will go about it without any distractions.

“Winning three of the last four, a top-(35) recruiting class, a good spring and the way recruiting is going right now, it’s just a very, very positive vibe in the Manning Center,” Luke said. “A lot of really positive momentum right now, so I’m very excited about that.”

What to watch for in Ole Miss’ fall camp