Which Ole Miss freshmen are impressing in fall camp? 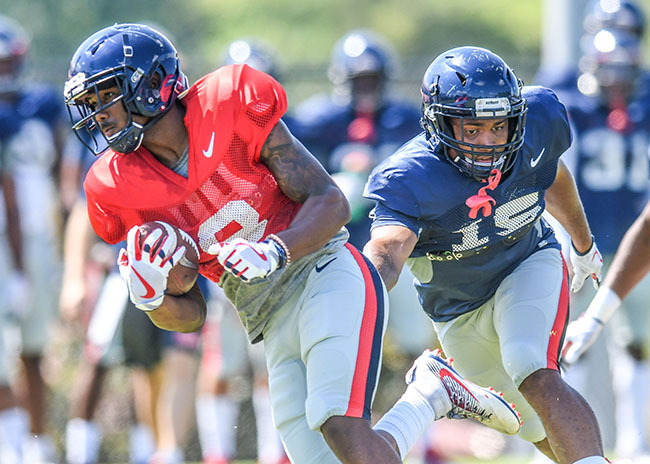 Every college football season comes with a new crop of signees, some of which will contribute immediately based on need or talent.

It’s too early to know exactly how many freshmen will see the field for Ole Miss this season, particularly with the new redshirt rule in effect, but some of the newcomers have made a good first impression on head coach Matt Luke through the first week of preseason camp.

One youngster that will definitely get playing time this year is offensive lineman Ben Brown, whose name has been buzzing since the spring. Ole Miss has one of the SEC’s more veteran lines with all five starters back, but the 6-foot-5, 300-pound redshirt freshman is neck and neck with senior Jordan Sims in the competition at right guard and will be part of the rotation up front regardless if he takes the field with the first-team offense or not.

Running back Tylan Knight and receiver Elijah Moore “show flashes,” Luke said this week. Moore, a former four-star recruit, is already repping with the second-team offense, a testament to his abilities given the Rebels’ talent at the position, while Knight is getting some third-team reps.

Knight, who also played quarterback, receiver, linebacker, defensive back and special teams at Pearl High, is a longshot to get significant reps at running back this season given the Rebels’ depth at the position and a frame (5-foot-7, 170 pounds) that still needs to be filled out, but he could get a look at returning kicks depending on if the Rebels still plan to use A.J. Brown in that role.

The opportunity is there for freshmen to contribute quicker on defense given the degree of uncertainty on that side of the ball, particularly in the second and third levels. Luke said cornerback Keidron Smith and linebacker Kevontae Ruggs have caught his eye early.

At 6-2 and 180 pounds, Smith, who’s getting some second-team reps, is already one of the taller defensive backs on the roster and gives the Rebels the kind of length and range they don’t otherwise have at the position. Ruggs is a long, slender athlete that profiles more as a situational player early in his career, but the 6-4, 190-pounder has already shown his athleticism and playmaking ability with an interception during Tuesday’s practice.