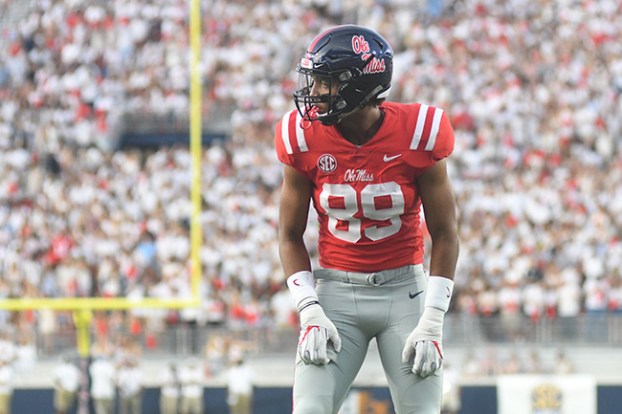 Ole Miss’ competition on the defensive line has extended beyond trying to find replacements. Incumbents are also trying to hold on to their spot at the top of the depth chart a week into preseason camp.

Those in the running are fine with that.

Questions about production usually reserved for the second and third levels of the Rebels’ defense have surfaced up front with Ole Miss dealing with inconsistency and turnover at certain positions. Most notably, Marquis Haynes and Breeland Speaks are gone off the edge after combining for 112 tackles and half of Ole Miss’ 29 sacks last season.

Victor Evans and Ryder Anderson opened camp as the first-team ends, but Qaadir Sheppard, Charles Wiley and converted linebacker Brenden Williams are also rotating there. Sheppard, a fourth-year junior, is healthy again after a leg injury limited him to three games a season ago.

Anderson is going through camp at nearly 265 pounds, a 40-pound increase since he signed with Ole Miss that should help his physicality in setting the edge as the Rebels try to improve a run defense that ranked 123rd out of 129 FBS teams last season. The 6-foot-6 sophomore said maintaining his leverage in the run game has been his focus in camp as he tries to hold off the competition.

“I have to keep working,” Anderson said. “If I let up, somebody is going to be in front of me. And that’s for every position.”

Defensive tackle Josiah Coatney is closest to a sure thing up front for the Rebels after recording 65 tackles, eight tackles for loss and 3.5 sacks a season ago. Benito Jones is back at nose tackle after recording 29 tackles and 7.5 tackles for loss last season, but coach Matt Luke said this week that Ross Donelly is neck and neck with Jones at that spot. Austrian Robinson and redshirt freshman Sincere David have also been rotating between the first and second teams while junior college transfer Tariqious Tisdale, who could play inside or out, has gotten some second-team reps.

A career backup, Donelly said being that high up on the depth chart is serving as added motivation in camp as the 6-1, 318-pound senior tries to round out his game with more of a pass rush. But Donelly said he views his emergence as a reinforcement more than a competition.

“I look at it as we’re both getting better to benefit our team,” Donelly said. “That’s the way I look at it. He pushes me, and I push him. Iron sharpens iron. The better we both get, the better the team gets.”

Ole Miss will settle on a depth chart before heading to Houston for the season opener against Texas Tech on Sept. 1 (11 a.m., ESPN). There’s plenty of competition to go around until then.

“Nobody can slack off,” Donelly said. “Everybody has to come in to work because there’s somebody right behind us ready to take that spot if you slack off.”

Ole Miss unofficially began the Kermit Davis era this week with its Canadian tour in which the Rebels played four... read more