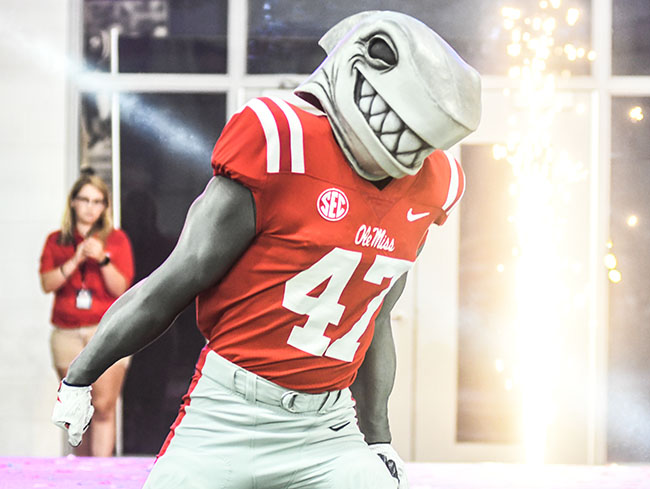 University of Mississippi's "Meet the Rebels" fan day at the Manning Center in Oxford, Miss. on Friday, August 10, 2018. Fans were able to get autographs from Rebel football, soccer, volleyball, rifle and spirit squads during the event. (Bruce Newman, Oxford Eagle via AP)

Ole Miss revealed its new on-field mascot Saturday afternoon as part of the school’s Meet the Rebels festivities at the Manning Center, and reactions to it were, well, mixed.

Landshark Tony, as it’s officially been named, sports a football jersey and pants with a flat shark head accompanied with a toothy grin stretching from eye to eye. Tony will wear No. 47 in honor of the late Tony Fein, the former Ole Miss linebacker who began the landshark mantra for the defense in 2008.

Reactions near and far to the Rebels’ new mascot quickly began pouring in on social media. Here’s a sample.

Ole Miss has a new mascot, and he's already in the running with Purdue Pete for the most nightmare-inducing in the country https://t.co/8ayYIaZb7d

In a pinch, you can heat up Tony’s head and use it to iron your shirt!

Clarification here: Colonel Reb was in my mind, but he’s actually been gone for 15 years.

While I like the idea of a land shark mascot, I think the costume design from Ole Miss really leaves a lot to be desired. I always enjoyed Rebel Black Bear but that just may be me. Anyway, let’s get to football season now plz.

Ole Miss, I love you, but our new mascot is going to haunt my dreams for the rest of my life pic.twitter.com/KasO4iEAh2

I’m not sure that I can be an Ole Miss fan anymore. Can’t we just stick with no mascot? Like this is embarrassing.