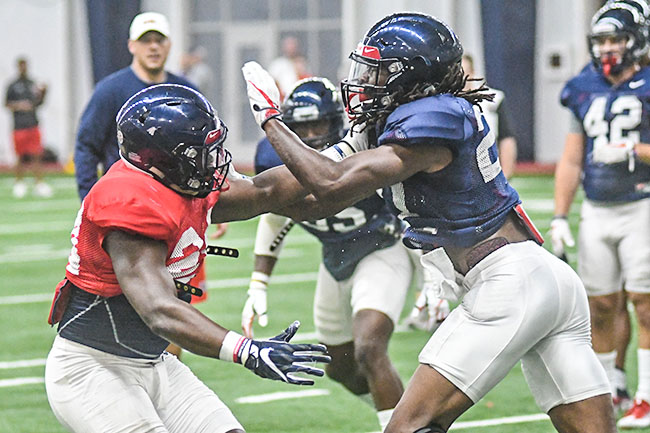 Ole Miss linebacker Kevontae’ Ruggs (27) goes up against running back Eric Swinney (24) during a drill at football practice at the Manning Center in Oxford, Miss. on Monday, August 13, 2018. (Bruce Newman, Oxford Eagle via AP)

Ole Miss’ lack of production at the second level of the defense has put an added emphasis on recruiting at the position with the Rebels bringing in a surplus of linebackers the last two years.

Those efforts could pay off sooner rather than later.

Freshmen Zikerrion Baker and Kevontae’ Ruggs are the latest youngsters to make a push for playing time this fall. Both ran with the first-team defense during Ole Miss’ 11th practice of preseason camp Monday.

Baker, who redshirted last season, has been rising up the depth chart since putting together a strong spring and entered camp as Detric Bing-Dukes’ backup in the middle, though nothing is finalized with three weeks still left before the Rebels open the season against Texas Tech on Sept. 1 in Houston. There’s not a linebacker on the roster that had more than 24 tackles a season ago.

“Every day is a fight,” Baker said. “Everybody is scratching and clawing, everybody wants to be that No. 1 linebacker, so everybody is fighting for that position.”

A true freshman, Ruggs has turned heads with his combination of length, speed and athleticism on the outside. The 6-foot-4, 190-pounder has rotated mainly between the second and third teams during camp, but Ruggs, who’s pulled down at least one interception, earned first-team reps ahead of fellow freshman Josh Clarke on Monday after putting together what coach Matt Luke called the strongest performance of all the linebackers during the Rebels’ scrimmage Saturday.

“He performed really, really well,” Luke said. “Made some mistakes in there as to be expected, but he runs around and hits. He’s a guy that I think you’re going to see play for sure on special teams and obviously have a role on defense.”

Baker said he felt like he had a “pretty decent scrimmage” with a missed fit here and there in the running game. That’s important for the 6-1, 216-pounder considering his skill set is tailored more toward being a downhill linebacker while still learning the intricacies of playing in space.

“It was kind of difficult coming from high school because once you get to college, the terminology,” Baker said. “It’s a little different, but if you go study your plays and watch film, you’ll get it. It’ll just take time.”

Said Luke, “Zi is very, very physical. He doesn’t mind stepping up and hitting you. He brings that part to the table, and he’s doing a good job of playing fast all the time.”

Jonathan Hess, another member of the 2018 signing class, got some second-team reps Monday alongside Bing-Dukes. Even if it means simplifying things a bit on defense, Luke said the best linebackers will play regardless of age or experience.

That could mean a youth movement of sorts.

“I’m big on that,” Luke said. “I think when you sign and recruit good players, you want to let them play. The less amount of thinking they can do, the better. But I think having an older guy out there maybe with him to maybe help get him lined up will help with some of that.”