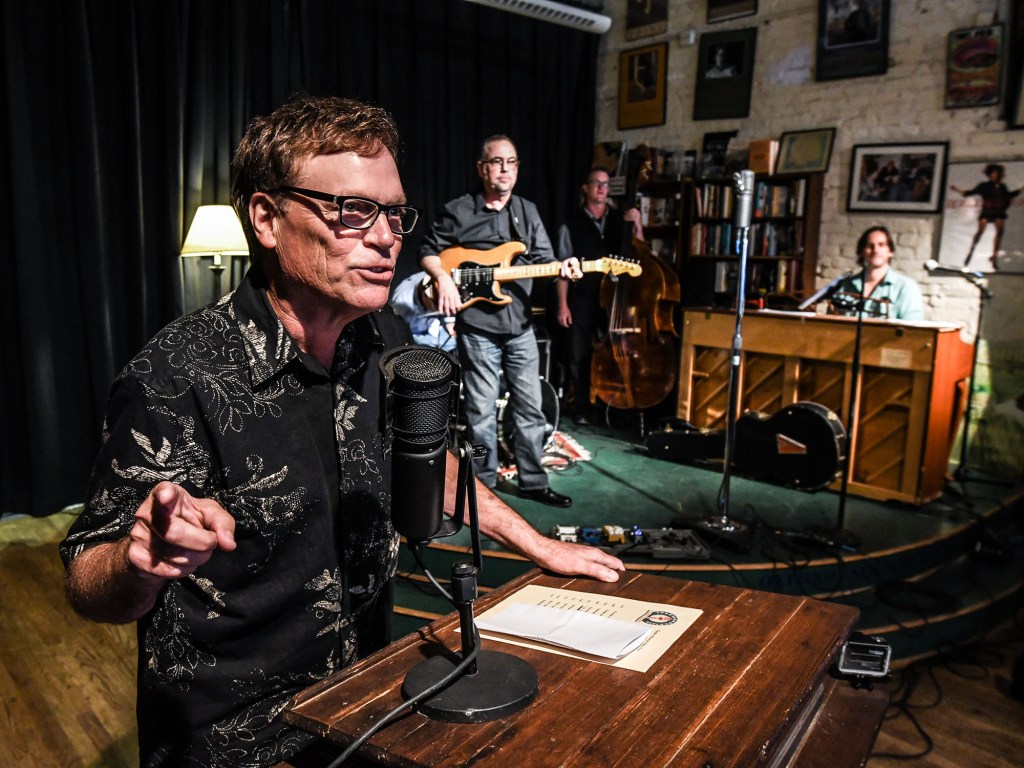 Host Jim Dees speaks at Thacker Mountain Radio Hour, at Off Square Books in Oxford, Miss. on Thursday, April 6, 2017. The weekly literature and music program has been picked up for broadcast on Alabama Public Radio (APR) beginning Saturday, Sept. 1.

Thacker Mountain Radio Hour will head across state lines for the first time on Sept. 1, thanks to a new partnership with Alabama Public Radio.

APR will air the show every Saturday night at 9 p.m., both online and on the radio. The one-hour broadcast on Mississippi Public Broadcasting will also continue to air at its usual time on Saturdays at 7 p.m.

Thacker Mountain Radio’s producer, Kate Teague, said APR’s broadcast of the show is in keeping with the program’s mission.

“We always say our show is about documenting and celebrating the words and music of a diverse south,” Teague said in a recent news release. “To have APR join us and broadcast our show across the state of Alabama will help us continue and strengthen that mission. We certainly hope that people in Alabama will come to embrace our show as fervently as our Mississippi audience.”

Every Thursday at 6p.m. during the fall and spring months, Thacker Mountain Radio Hour hosts a free, live show at Off Square Books. Each show is anchored by host Jim Dees and house band, the Yalobushwhackers.

The Thacker Mountain Radio Hour celebrated 20 years on the air in 2017, and received the Mississippi Governor’s Award for broadcast excellence as well a citation of merit from the Mississippi Institute of Arts and Letters.

The program has booked a wide array of authors over two decades, including bestsellers Rick Bragg, Elizabeth Gilbert and Jesmyn Ward, as well as newcomers Catherine Lacey, Sloane Crosley and Michael Farris Smith.

“I’m very happy to bring the Thacker Mountain Radio Hour to Alabama Public Radio,” Duff said. “The combination of regional music and the focus on authors from the area makes the program perfect for our audience.”

The first show on APR will be Sept. 1 and will feature a tribute to the Gulf Coast. Guests will include author Jack. E. Davis, who has written a history of the Gulf of Mexico, Fairhope, Ala.-based songwriter Molly Thomas and veteran New Orleans keyboardist Jon Cleary.

When the show is in its off-season, Thacker Mountain Radio hits the road for remote shows across the state, from the Neshoba County Fair to Ocean Springs. While no official Alabama remote show dates have been announced, Teague said an announcement could be coming soon.