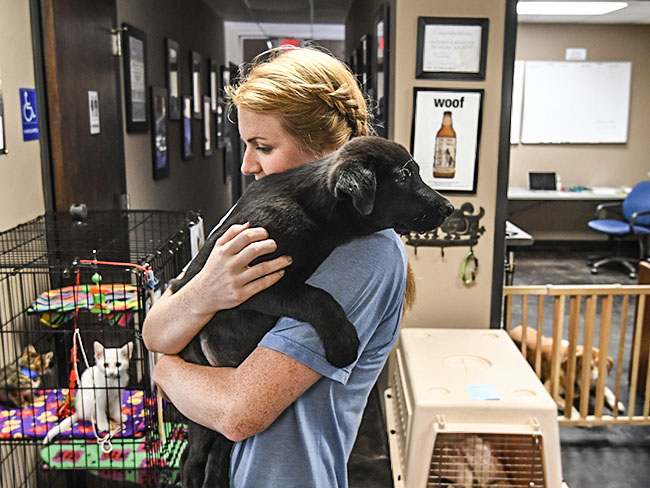 The Oxford Board of Aldermen approved a request for proposal for a new organization to assume operations of the animal shelter building during a special meeting Tuesday afternoon.

Prior to discussion of the RFP, Mayor Robyn Tannehill took a moment to address misconceptions and rumors she’d heard regarding the issue since the Oxford-Lafayette Humane Society announced its intent to let its contract with the city expire on Sept. 30.

First and foremost, she said, the City of Oxford owns the physical shelter building, but OLHS is its own separate 501(c)3 organization, not a city agency. Therefore, questions regarding what will become of the animals currently in the shelter and any money OLHS possesses do not fall under the city’s purview.

“(OLHS) will be there and will be operating as the shelter until Sept. 30, but as I understand it, only accepting animals from Oxford and Lafayette County. That shelter chose, in the past, to accept animals from surrounding counties,” Tannehill said. “They will take the animals with them, vacate the building and it will be empty when we take the building back over.”

Once OLHS vacates the building, the City of Oxford will begin making repairs and upgrading the building, which will take approximately two months. Tannehill said she’d received a proposal from the City’s buildings and grounds department, and that repairs would be in the $25,000 range. Workers will need to remove all ceiling tiles and insulation to combat a pest problem, paint rooms and possibly complete a room that is unfinished.

New tenants of the animal shelter building will have to follow a few guidelines previously not imposed on OLHS, including only accepting animals from Lafayette County and partnering with a veterinarian or spay and neuter service so no animals are adopted without being fixed. There will also be a new guideline regarding the name of the shelter.

“There’s been such a misperception that this is a city-run facility,” Tannehill said. “And I think a lot of that is because the name of it is the Oxford-Lafayette Humane Society.”

The City will continue to pay for the utilities and animal control costs, but the organization that receives the contract will be responsible for nearly everything else.

Tannehill said she wants any organization that steps up to fill this need, to have a “full and open dialogue” between its board and the board of aldermen about the funds that are necessary to run the shelter. What the city pays for, as Alderman Janice Antonow said, is nowhere near enough to pay for the operation of the shelter. Fundraising will need to be a large part of the mission of the new organization, she said, in addition to other responsibilities.

Antonow pointed out that much of the OLHS fundraising dollars were going to pay for animals from other counties, and Alderman John Morgan agreed.

“That was basically the downfall of the shelter, to tell the truth,” Morgan said. “Other people will argue different things, but we just had too many animals.”

By law, an RFP must remain posted for 15 working days past its second advertisement before bids can be accepted. However, the aldermen tasked public works director Bart Robinson with researching ways to expedite the process due to its urgency.

In coming weeks, the aldermen said they will appoint a selection committee and possibly seek some form of interlocal agreement with Lafayette County.