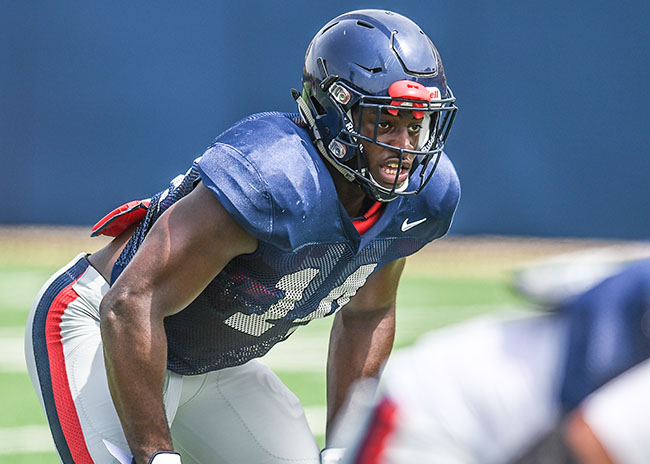 The second level of Ole Miss’ defense has drawn mixed reviews for the better part of two seasons, and that’s putting it kindly.

As the Rebels go through their second full week of preseason camp, not much has changed.

First-year linebackers coach Jon Sumrall is still sifting through all of his options as he tries to find a way to increase production at a position where it’s mostly lacked. And that was with DeMarquis Gates, who’s no longer around after leading the Rebels in tackles each of the past three seasons.

Ole Miss doesn’t have a linebacker left on the roster that had more than 24 tackles a season ago. That was Detric Bing-Dukes, who opened camp atop the depth chart at middle linebacker alongside redshirt freshman Josh Clarke, but sophomore Mohamed Sanogo, redshirt freshman Zikerrion Baker and true freshman Kevontae’ Ruggs have spent the week rotating with the first-team defense. Willie Hibbler ran with the second team Wednesday while freshmen Jacquez Jones and Jonathan Hess have also rotated in with the second and third teams.

Sumrall said there are still six or seven linebackers vying for spots on the two-deep. He’s letting the competition decide what that will look like.

“Everybody in that room has gotten a crack to show what they can do,” Sumrall said. “All four freshmen walk in the door and they’ve gotten more reps than probably most places are giving their freshmen in Day 1, Day 2 and Day 3 of training camp because I want to see who’s going to give us the best run for the long haul.

“You may have to play some young guys and get them ready to go as fast as possible.”

Ruggs has surged up the depth chart with his speed and physicality and performed the best of all the linebackers during Saturday’s scrimmage, coaches said. He’ll play this fall with Sumrall adding how the 6-foot-4, 190-pounder progresses over the next week heading into game prep for the Rebels’ opener against Texas Tech on Sept. 1 in Houston will determine exactly how extensive his playing time will be.

“He’s really a quick learner from a football IQ standpoint, and he’s kind of hungry,” Sumrall said. “I think he’s got a little chip on his shoulder, and he plays at a speed, when you watch him on video, I don’t care if you’re judging as a (defensive back), a linebacker or whatever, that dude runs. He gets to where he’s going in a hurry, he’s got a sense of urgency, and he makes our defense go faster.”

As for the group, Sumrall said he was “a little disappointed” in their collective performance in the scrimmage with a lack of communication causing his group to think too much after the snap. That’s not a surprise with so many young linebackers getting significant reps, but Sumrall said the breakdowns were across the board — not a great sign for the more seasoned linebackers with coaches and players talking at length this offseason about their belief that a full year of familiarity with Wesley McGriff’s defense would help alleviate some of those problems.

“The communication piece, I don’t care if you’re a first-day player or a fourth-year player, if you’re not on your game from a communication standpoint, you’re going to have a dropoff and not be able to compete to play,” Sumrall said.

But Sumrall said Saturday’s issues were more of an anomaly than the norm, adding that communication had been better in previous practices and was “back to what it needed to be” during a simulated scrimmage Wednesday. It’s finding the right combination of consistency that continues to be the challenge at one of the Rebels’ more maligned positions.

“We’re trying to figure out how can we get those guys to be as complete as possible instead of one guy having this strength and another guy having another strength,” Sumrall said. “We’re figuring out how we can get them to be complete and then also playing to their strengths.”