Notes and observations from Day 13 of Ole Miss’ preseason camp 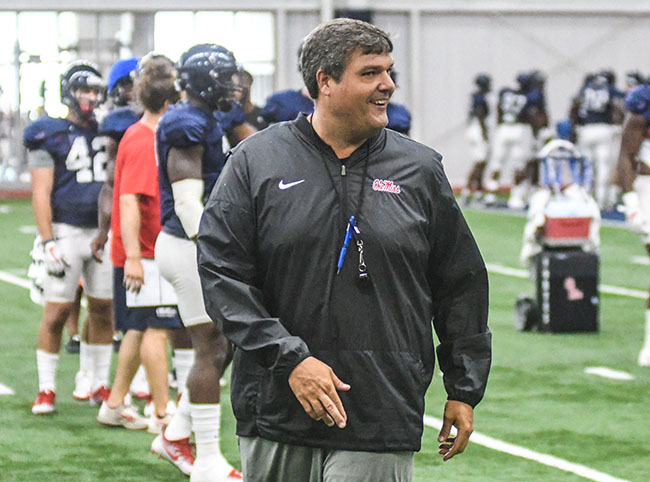 Ole Miss held Day 13 of preseason camp for with a practice lasting nearly two hours Wednesday morning. Here are some notes and observations from the open viewing periods…

• Ole Miss continued to do a lot of mixing and matching on the defensive side of the ball, particularly in the front seven.

Ross Donelly and Benito Jones ran together with the first-team defensive line on the interior while Tariqious Tisdale and Qaadir Sheppard were the first-team ends. True freshman Kevontae’ Ruggs continued to rep with the first team at linebacker and was joined by sophomore Mohamed Sanogo. Myles Hartsfield ran with the ones at cornerback. Sophomore C.J. Miller repped with the ones at safety with C.J. Moore while Montrell Custis was at Star.

Meanwhile, Detric Bing-Dukes, who began camp atop the depth chart at middle linebacker, hasn’t repped with the ones in any of the viewing periods this week. It could just be a product of the experimentation going on, but youngsters at the position continue to get long looks with meaningful reps.

• Ben Brown looks to be creating some serious separation in the only real position battle on the offensive line. The redshirt freshman continued to run with the first team at right guard while Jordan Sims has been at center with the second team all week during the viewing periods.

• A.J. Brown continues to be limited with a strained hamstring. He, DaMarkus Lodge (ankle sprain), corneback Javien Hamiton (hamstring) and Ken Webster (hamstring) were all dressed out but only did light jogging and work on the side. Freshman receiver Demarcus Gregory (knee) and defensive back Vernon Dasher (groin) didn’t practice.

Coach Matt Luke said he earlier in the week he expects Brown and Hamilton to return to full participation by the end of the week.

• Tight end Octavious Cooley has been running almost exclusively with the second team in camp but rotated in with Dawson Knox. Reserve tight end Jason Pellerin was back catching passes. He didn’t seem bothered by the dislocated finger he suffered early in camp.