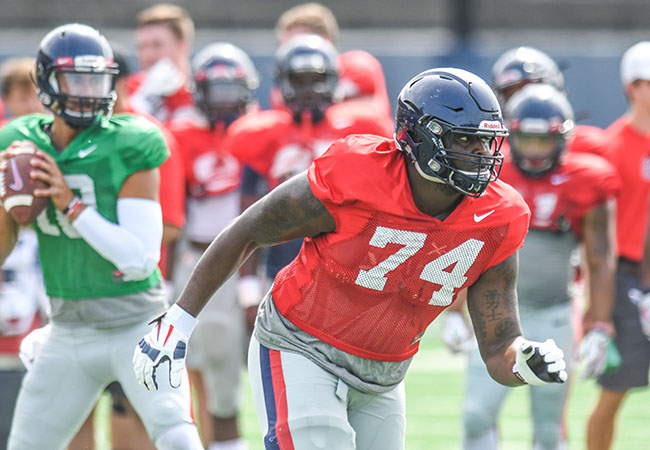 Greg Little is already one of the best college football players in America.

Ole Miss’ junior offensive lineman is regarded as one of the top prospects for next year’s NFL Draft regardless of class. In fact, Little is widely projected to the the first offensive tackle to come off the board in April.

“Really just focused on getting better as an individual and make my game elite,” Little said.

Since taking over as the Rebels’ left tackle midway through his freshman season, Little has been as consistent as anybody in the country at his position. Little has mostly kept the pressure off Ole Miss’ quarterbacks as their blindside protector in what was the SEC’s top passing offense last season while handling most linemen and linebackers he goes up against in the run game with his strength and athleticism, though Little said he’s working to clean up his technique and quickness to the second level.

“Just getting to the second- and third-level stuff,” Little said. “First level is using simple hands and steps. The second level is understanding the plays and what you can do as a veteran, so coach Luke is OK with me doing things over other guys because he knows I understand the concept and the play. Also just study my opponent better. Just knowing him in and out and knowing what he does best.”

Little is part of one of the SEC’s more seasoned offensive lines with all five starters back from last season, though redshirt freshman Ben Brown, who repped with the first team again Wednesday, is making a serious push at right guard.

The group’s experience, he said, should benefit a backfield that’s far more green. Ole Miss is looking at junior college transfer Scottie Phillips, Eric Swinney, converted safety Armani Linton and true freshmen Isaiah Woullard and Tylan Knight to replace 1,000-yard rusher Jordan Wilkins. Phillips and Swinney, the only back on the roster with more than 40 career carries, are leading the competition.

“I feel like if you have an experienced o-line, having an inexperienced running back group is not bad,” Little said. “They’ll get acclimated to having that experience real quick as the holes are opening up and they’re playing with us.”

A.J. Brown (hamstring) and DaMarkus Lodge (ankle) were limited again to light jogging and some conditioning work during the viewing periods of Wednesday’s practice.

Coach Matt Luke said earlier in the week he expects Brown to return to full participation by the end of the week, but the absence of two of Ole Miss’ starting receivers has meant more reps for Floyd Allen and Braylon Sanders.

Allen, a walk-on, is filling in for Brown in the slot while Sanders is working on the outside in Lodge’s absence. Freshmen Elijah Moore and Miles Battle have gotten some work with the second team. Quarterback Jordan Ta’amu said he hasn’t notice much of a difference in the timing of the passing game, adding the extra reps for those next up on the depth chart is a positive considering they’re a play away from being in those positions permanently.

“I believe they’re doing good out there,” Ta’amu said. “It’s good to have them reps just to be ready at any time. The moment could come, so I’m excited to see what they could do and I’m excited they’re out there right now practicing.”

‘Everybody in that room has gotten a crack’ as…