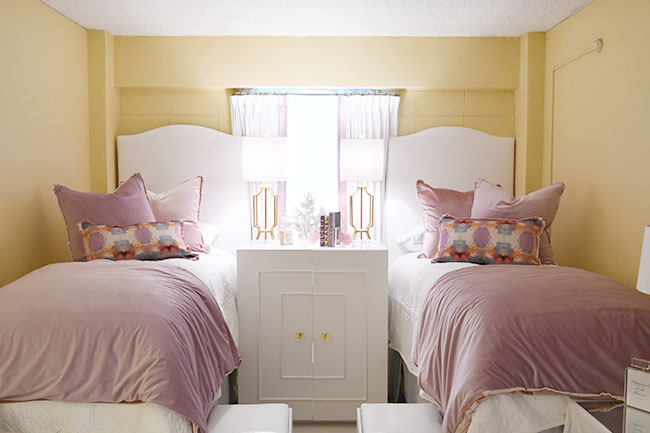 When college dormitories come to mind, the first thought probably isn’t one of luxury and relaxation – that is, unless you’re Dawn Thomas.

Thomas, who owns Jackson-based After Five Designs, has devoted the last 15 years to making dorm rooms come to life, awash in calming pastels and neutrals, with a splash or two of original artwork. The head of a surgery center in Jackson by day, Thomas first entered the dorm decorating business after decorating her daughters’ and niece’s rooms at Ole Miss.

From there, the business grew, and now she and her team have decorated rooms across the country, from UCLA to the University of Alabama. This move-in season, Thomas’ four-person team decorated eight residences for Ole Miss students, both apartments and dorms.

Aside from her creative eye, Thomas said the biggest appeal for hiring a decorator like After Five Designs is convenience.

“If you rent out a U-Haul, and bring all of your dorm stuff over here, you’ll spend a lot more than I charge. So for the people who live out of town, I’m the answer,” Thomas said. “I’ll buy everything from the mattress pads, to throw pillows, to Tide Pods and store it for a client and move it into the room for them.”

“It’s been so convenient, especially driving such a long distance,” Cavanaugh said. “We don’t have to worry about anything, and we know it’s going to be gorgeous. It feels like home, even though it’s so far from Austin.”

The room began as a blank slate – cinder block walls, two wood-framed twin beds, two wooden desks and plastic chairs. Thomas said her work is not about removing furniture, which is against the rules, but transforming it. After placing a large area rug, the beds were set up and the desks were moved to one side of the room. To the desks, Thomas and Carmody added custom-made off-white covers, anchored by mirrored desktops cut in Jackson and lighted vanity mirrors. The dated plastic chairs were hidden under the beds and replaced with modern clear plastic ones.

Dorm beds are notorious for being uncomfortable and utilitarian, but Thomas said she sought to remedy that problem by adding five layers of padding – a Tempur-Pedic mattress pad, a featherbed, another mattress pad and a padded mattress cover – all before the sheets are put on.

“As you can see, Dawn makes a bed you won’t want to get out of,” Carmody said.

Girls in an After Five Designs room can complete their “Princess and the Pea” fantasy by wrapping all the mattress layers in queen-sized sheets and quilts. This way, Thomas said, they can continue to use the items from their dorm room for years to come.

“These are not just items girls will use for one year,” Thomas said. “I’ve had girls take them on to their apartments, put them in their rooms when they get married. It’s an investment.”

As they’re wanton to do, she said, investments come with a price tag. However, Thomas said she doesn’t make much profit, aside from installing the rooms on move-in days. What isn’t custom-made by regional companies, she explained, is ordered from Amazon or bought wholesale, and the clients are generally charged the wholesale price.

The room was completed with a custom-made cabinet from Worlds Away in Memphis. It’s a design Thomas pioneered, and it can hold a mini-fridge, microwave and other essentials, mess-free and out of sight. Thomas also brought in a white fur rug and matching leather futon, crowning the room with two custom-made art pillows of her own design and a commissioned painting of a ballerina by Christie Farese.

“One thing I can tell you that I don’t think Dawn realizes is, by turning this room into a beautiful space, it makes it easier for the parents to leave,” Carmody said. “Parents leave knowing their child is so happy and proud, and they’re taking pictures and calling their friends, posting on social media. It eases that transition.”

Sewell and Cavanaugh’s parents agreed with this statement. Plus, Olivia’s mother Catherine Sewell said, it was a matter of convenience. While most parents spent the morning hauling boxes up one-by-one, the Sewells arrived in Oxford around noon, ate lunch at Bourè and got frozen yogurt before entering the residence hall. All that was left to move in was clothes and shoes – and Thomas even provided instructions to ease that process.

“She sent instructions to us on how to pack, and even ordered the Sterilite containers from Amazon to my house,” Catherine said. “The drawers are already packed and neatly folded, and then she places it into the room. She even gave us guidelines for the hangers we needed to buy for maximum space-saving. She’s cornered the market on dorm decor.”

After Five Designs is available through its website, afterfivedesigns.net, as well as The Mustard Seed antique mall on West Jackson Avenue.

Clark to receive Distinguished Alumnus Award from University of…