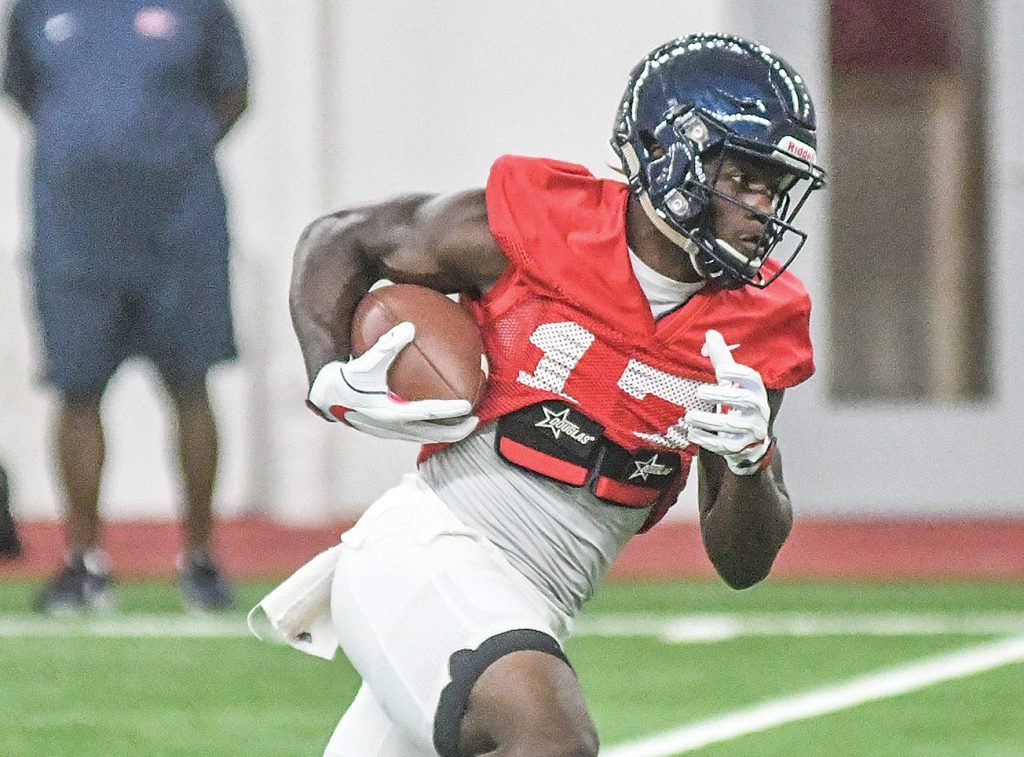 Allen has been running with the first-team offense for the better part of two weeks in place of A.J. Brown, who has been limited to light jogging and conditioning work during that time as the Rebels’ All-American receiver nurses a hamstring injury. Offensive coordinator Phil Longo said Brown is being held out as more of a precaution with the Rebels’ opener against Texas Tech in Houston on Sept. 1 quickly approaching, but Brown will return to his usual spot atop the depth chart at some point between now and then.

For now, Allen is enjoying his rare time there.

“I’ve been granted the opportunity to have a lot of reps right now due to A.J. being down and all kinds of situations like that,” Allen said. “Camp’s going real well. I feel like I’m competing real well with the ones.”

Yet if it weren’t for the No. 17 jersey that corresponds to it on Ole Miss’ official roster, most people outside of the program wouldn’t even know his name.

Ole Miss is the third school in four years for Allen, who’s now a senior. The 5-foot-11, 185-pounder went virtually unrecruited coming out of the Texas high school ranks and initially ended up at NAIA-member Bethany College, where he played in six games as a freshman. He then moved on to El Camino College in Torrance, California, but once a stress fracture in his ankle ended his sophomore season after two games, he had just nine catches to show for his first two years of eligibility.

Cal, Oregon State, Utah and Utah State all showed varying levels of interest in Allen but “kind of disappeared” after the injury, he said. Allen wondered if he’d ever get his shot to play at the FBS level.

“There’s those slim moments where you think it may not work out, but I just kept faith in myself and faith in my work that eventually somebody will bless me with the opportunity,” he said.

That ended up being then-Cal assistant Jacob Peeler, one of the few coaches that kept in contact with Allen. When Peeler was hired as Ole Miss’ receivers coach in January 2017, he couldn’t offer Allen a scholarship but invited him to join the team as a walk-on.

“I would love to say it was just my tenacity and will to win,” Allen said as to why he thought Peeler stuck with him, “but honestly I don’t know and I can’t thank him enough just for the opportunity.

Allen played in six games last season, all on special teams, but seems poised for a much bigger role in his final season with the Rebels. Being the first option behind Brown in the slot indicates Allen has a spot in the two-deep, though he has some competition from four-star signee Elijah Moore, who’s been running with the twos there.

“I just think I’ve improved all around when it comes to route running, blocking and just knowing the plays,” Allen said. “Coming in last season, I was behind the eight-ball because I didn’t really know much of the plays, but now that I’ve had a full year in the playbook, I feel pretty comfortable with everything.”

His hope is that it’s all enough to make for a successful ending to his nomadic college journey.

Notes and observations from Day 14 of Ole Miss’…