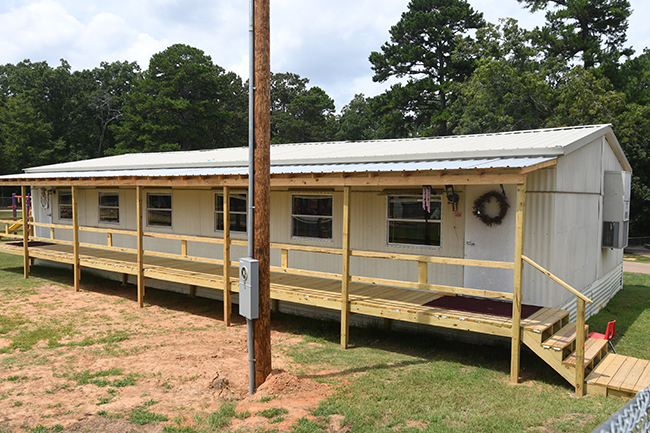 LCSD has six modular classrooms, or portables, on campus at the moment – one at Lafayette Upper Elementary School and five at Lafayette Lower Elementary School. A $23 million bond referendum to fund the construction of a new LLES, along with other space-maximizing updates, will be up for a vote on Sept. 11, and according to the trailer teachers, it’s a move that is much-needed.

“I don’t think it’s ideal for anyone, but we’re making the most of it,” Lyndsey Cregar, literacy coach at LLES, said. “Even in the main building, there’s overcrowding. Everyone deserves their own space. The students deserve to have more space.”

“We make it work” seems to be the mantra for the teachers in portables. Currently, LCSD is housing its specialized areas in portables: three interventionists, a literacy coach, a music teacher and a second-grade gifted teacher.

These teachers all admit that, while being in a portable isn’t always their first choice, it’s often the better option for their students.

“I didn’t have windows last year, so I love having more light and space. We make a lot of noise and do things out of the box, but we don’t bother anyone,” gifted teacher Stephanie Brown said. “Is it the most optimal? I don’t know, but we adapt. For example, we’re doing robots, and you have to account for the floor being uneven. Or if someone builds a tower and a student jumps, it’ll come crashing down.”

Ashley Gafford and Lynn Bostick, interventionists at LLES, said they don’t have a problem walking back and forth to get to their students. Plus, Gafford said, the students who actually come to her classroom are only there for 30 to 45 minutes. However, for Brown and Ray Anne Adams, music teacher, things are a little more difficult, because there’s a continuous stream of students all day, they said.

Regardless of the number of students they have, the trailer teachers said they’re excited about the possibility of a new school for because of the added safety features. First and foremost, Cregar said, navigating the halls will be easier. The new LLES will be divided into grade-level wings centered around a main hub, while the current school is more closely akin to a “maze,” she said.

“Right now, we have sort of a coding system to help students know how to get from point A to point B in the building,” Cregar said. “That’s a problem we’ve had, teaching kindergarteners how to get back to their classroom from the cafeteria. But we stand in the hallway and help guide them, especially at the beginning of the school year.”

The new school will also have a FEMA-certified gym that can act as a safe room in severe weather situations.

LCSD is no stranger to modular classrooms. Bostick, who’s taught in Lafayette County since before the upper elementary school was constructed, said she can remember a time when there were “10 or 12” portables on campus to accommodate an overcrowded elementary school. Back then kindergarten through sixth grade were housed in one elementary school building. Condensing the grade levels in each school building helped for awhile, she said, but the overcrowding problems are back.

“There are a lot of people in the county who don’t have children in school anymore, and maybe don’t understand why this is such an important issue,” Bostick said. “At the very least, it would help a lot with traffic. It’s very congested to drop-off and pick-up here, and everyone, whether they have children or not, is affected by that.”

The new school, according to LCSD Superintendent Adam Pugh, will put the district on the right path to solving its overcrowding problems. In addition to constructing a new building for LLES, dollars from the bond referendum will also go toward updating classrooms for third grade and in the middle school, Pugh said in a meeting Tuesday night.

However, if the upcoming bond referendum isn’t passed next month, the district could have as many as 27 portables by the year 2038 due to overcrowding, according to Casey Rogers of Innovative Construction Management.

“Currently we have six trailers we have to teach students out of,” Rogers said. “The way we would solve the problem if we don’t build a facility is, in 2023 we’d have 13 trailers. In 2028, we’d have 18 trailers on this campus, and in 2038 we’d have 27 trailers if we didn’t build. That’s the forecast for how we’ll have to house the students if we don’t pass this bond.”