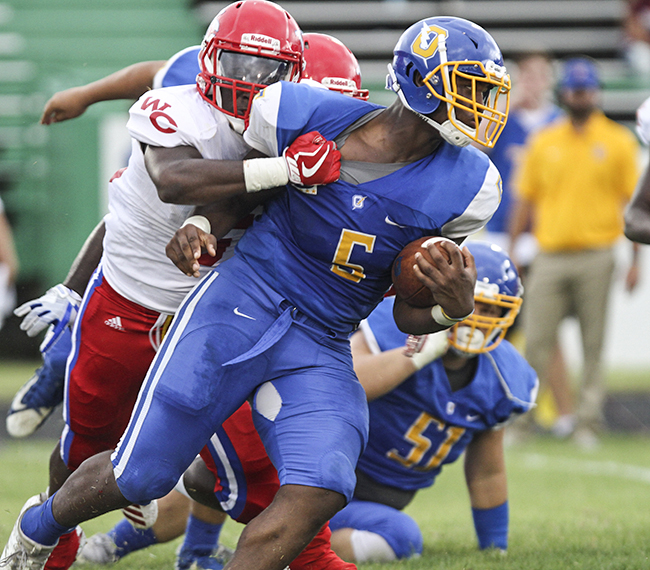 VICKSBURG — Thunder and lightning were the winners in Oxford’s season opener.

Though Warren Central left the field on Friday night with a 14-6 lead over the Chargers, the rain-shortened game was later ruled no contest by the Mississippi High School Activities Association.

“It’s almost like we got an extra jamboree in. Nobody got injured, and that’s a positive and played a half basically and we’ll crank it up next week,” Oxford head coach Chris Cutcliffe said.

Though the game was called during the third quarter due to weather, the matchup will not be placed on the record of either team, the MHSAA said.

Essentially, it is like the game was never played and the game will not be made up.

Though the game will not count against the Chargers, the Vikings dominated what football there was to play.

Warren Central dictated the pace with their run game, rushing for 161 yards and two touchdowns. The Vikings Jerrious Stovall scored the first touchdown of the game on a 39-yard run on the first drive of the game. The opening drive for Warren Central went 81 yards in 10 plays and did not include a pass play.

Corey Wilson, Jr. scored the Vikings second touchdown with a 13-yard run at the end of the first quarter.

“We obviously gave up too much rushing yardage,” Cutcliffe said. “We were missing a couple guys (on defense) that would’ve loved to have, but we had some good guys in. It was just inexperience. I think they got better as they went along. I think we’ll have a lot good film to learn from.”

The Chargers were without a couple starting linebackers due to injury, while Travien Sims was absent due to a death in the family.

Throughout the game, Oxford’s offense struggled to get going. The first four Charger drives resulted in a turnover on downs and three punts, one of which was blocked.

Things started clicking on the opening drive of the second half. Oxford went 68 yards in six plays to finally knock the zero off the scoreboard when quarterback John Meagher ran in from eight yards out. The point-after try was not allowed as play was halted after the touchdown.

“We finally got a little momentum and lightning hit again,” Cutcliffe said. “As we kept going I thought (Meagher) played better and better. It’s something we need to look at is playing better early.”

Oxford hosts Starkville in the Little Egg Bowl in the Chargers’ home opener on Aug. 24.