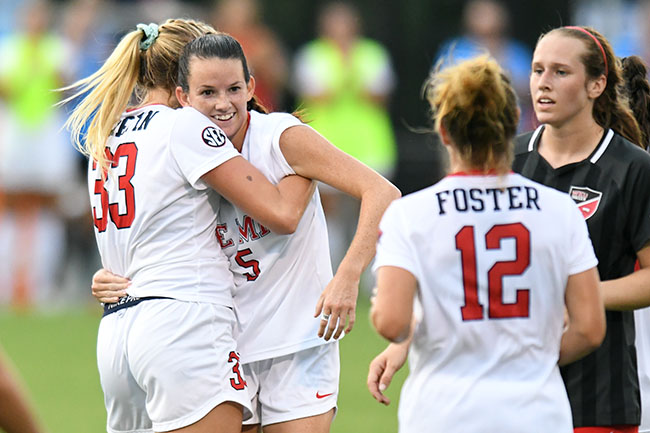 The Rebels started with a 6-0 win over Louisiana on Friday before following it up with a 4-0 victory over Western Kentucky on Sunday night at the Ole Miss Soccer Stadium. Senior midfielder CeCe Kizer led the charge with four goals, including a hat trick in Sunday’s shutout.

Kizer set the tone early, netting her first goal in the 43rd minute for a 1-0 lead that Ole Miss took into halftime. Kizer added two more goals after a brief lightning delay, including a penalty kick. Freshman Haleigh Stackpole scored the Rebels’ other goal in the 61st minute.

The Rebels had an equally easy go of it 48 hours earlier, leaning on the strength of four second-half goals to start the season with a shutout of Louisiana. Ole Miss has scored 14 goals in its last two season openers.

Kizer netted a goal late, but the scoring barrage was paced by the freshmen. Madisyn Pezzino scored two goals while Stackpole, Madison Smith and Sydney Michalak each put one in the back of the net for the Rebels, who scored half of their goals in a 10-minute span.

Ole Miss will hit the road for the first time Friday with a trip to Minnesota for a 7 p.m. match.