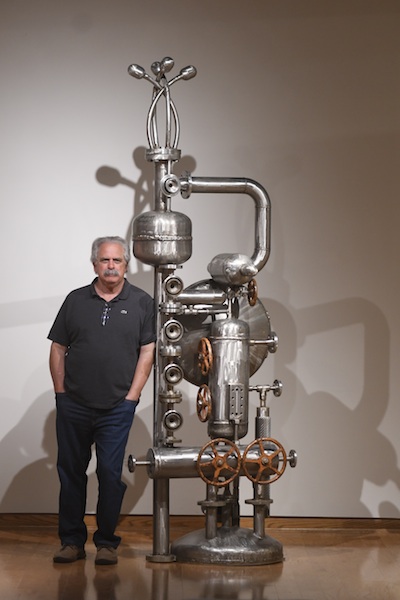 George Tobolowsky, with his piece titled "Wall Street," will have an exhibit at the University of Mississippi Museum as well as various locations around town, in Oxford, Miss. on Friday, Aug. 17, 2018.

The University of Mississippi Museum’s latest exhibit, “A Long Road Back” by sculptor George Tobolowsky, takes repurposed metal sculptures beyond gallery walls and into the LOU community.

Tobolowsky, who has a studio in Mountain Springs, Texas, has created over 500 sculptures in the last 14 years. His work was previously featured on the Yokna Sculpture Trail at Lamar Park – a 600-pound blue monkey wrench. In addition to showing his work in Oxford, Tobolowsky’s pieces are also on display at the Venice Biennale and Jerusalem Biennale. However, Tobolowsky describes himself rather humbly.

“I’m a found objects sculptor, better known as a junkyard dog,” Tobolowsky said. “I go to scrap yards and fabrication plants and pick up big and small pieces of metal. I build pieces and I go to shows all over the world.”

Tobolowsky’s metal sculptures will be on display inside and around the UM Museum, as well as throughout Oxford and the Ole Miss Campus, from Aug. 21 to Dec. 8. Maps of the sculpture locations will also be available at the museum.

A Dallas native, Tobolowsky received degrees in business and law, and a minor in sculpture, from Southern Methodist University in the 1970s, and focused on his corporate career for more than three decades. In the years following, he remained active in the local arts community, but did not have his first solo exhibition until 2006 at the Gerald Peters Gallery in Dallas.

“From large-scale floral motifs to menorahs, and from figural to abstract works, these steel sculptures possess dynamism and a multi-hued vibrancy that compels attention, and rewards viewing from multiple vantages,” UM Museum director Robert Saarnio said in a recent news release.

In addition to the museum grounds and the Walton-Young house, Tobolowsky’s works can be seen around Oxford at Rowan Oak, The Graduate Hotel, The Inn at Ole Miss, Oxford Canteen, FNC Bank’s offices on Office Park Drive, Baptist Memorial Hospital-North Mississippi, South Lamar Court and the Green Roof Lounge.

Most of his pieces are made from unaltered pieces of metal welded together, something Tobolowsky describes as a “jigsaw puzzle” approach. To transport the pieces around the country and the world, he explained, they must be packed into containers, airlifted or strapped to gooseneck trailers.

“My sculptures are one part assemblage and one part recycling, which follows closely with the philosophy of another early artistic influence and mentor, Louise Nevelson,” Tobolowsky said. “My works represent a logical extension of the welded steel sculpture tradition that can be traced from Julio Gonzalez to David Smith.”

For leadership with installation, and exhibition design and layout, museum collections manager Melanie Antonelli and preparator Taylor Kite played essential roles, according to a statement from the museum. Sculptures sited across the city were accomplished with the consulting curatorial and installation assistance of local artist Earl Dismuke.

The UM Museum will host an opening reception on Thursday, Sept. 13 at 6 p.m. and an artist talk with Tobolowsky on Thursday, Nov. 8 at 6 p.m. The museum is open to the public every Monday through Saturday, from 10 a.m. to 6 p.m. More information about the UM Museum and all of its exhibits can be found at http://museum.olemiss.edu.