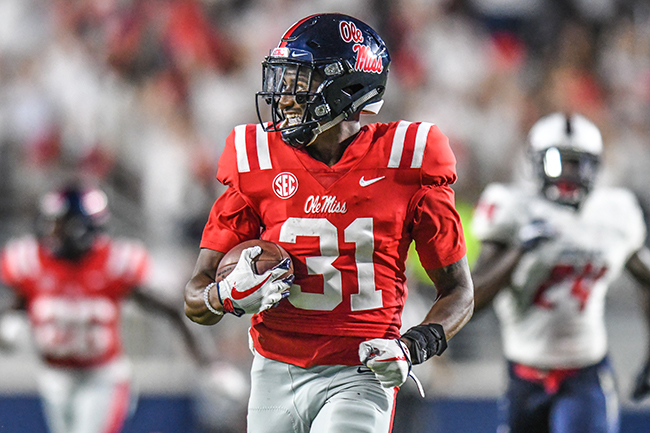 Jaylon Jones is back where it all began.

Ole Miss’ defensive back is going through preseason camp at cornerback, the position he was recruited to play two years ago. After playing all 12 games there with one start as a freshman, Jones moved over last season and started the last seven games at free safety.

He’s back at corner and has worked there exclusively with the first team throughout camp, indicating the move back to his more natural position is likely a permanent one.

“I’m back at corner, so I’m really excited about that,” Jones said. “Just being on that island and winning the one-on-one matchups is big for me. I’m willing to take on that role.”

But Jones is willing to move again if that’s what is needed at some point.

He’ll already be in another spot when the defense isn’t on the field. Jones proved to be a weapon as the Rebels’ primary kick returner last season, averaging 25 yards per return with a touchdown that covered 97 yards, and will continue that role this season with a twist. The NCAA’s Playing Rules Oversight Panel approved an alteration to the kickoff rules this offseason that will allow the receiving team to make a fair catch anywhere inside the 25-yard line and have it result in a touchback, but Jones didn’t sound like someone who’s interested in doing that a whole lot.

“Any time I get that ball in my hands this season, I’m looking to spark it and make a big play,” Jones said.

Whether Jones is asked to line up anywhere else this season remains to be seen.

A lack of consistency alongside Zedrick Woods last spring forced defensive coordinator Wesley McGriff to give Jones a look at safety, where the 5-foot-11, 186-pounder had 33 tackles, 1.5 tackles for loss and three pass breakups last season. But the experience of senior C.J. Moore and the development of sophomore C.J. Miller have the Rebels more confident in their options at free safety heading into the season opener against Texas Tech on Sept. 1 in Houston.

Jones is also going through camp as one of the few experienced, healthy options at corner with seniors Ken Webster and Javien Hamilton still nursing hamstring injuries. McGriff said the plan is to take their time so that both players are fully healthy once they do return.

Meanwhile, Jones is staying ready for anything.

“Wherever my coaches want me at, I’ll play with no hesitation,” Jones said. “I am happy to be playing corner, but I let them know and they know as well that if they need me at safety, I’ll go there. If you need me at d-end, I’ll go there. Anything to help the team win.”