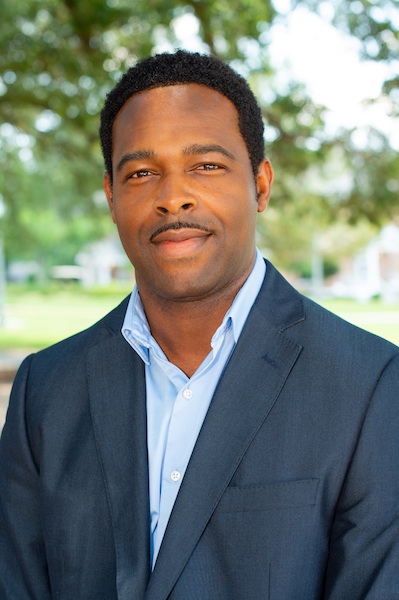 “Mississippi Revival Roads” begins when main character Eddie Sullivan gets a phone call saying, “The cancer has spread and is incurable.” Armed with nothing more than his vehicle and his trusty dog, Baby, Sullivan departs from Gulfport on a path to self-redemption and a date with fate.

The idea to set the book in Mississippi, Beverly said, came from his own travels through the state.

“I based (the novel) on my time living in Gulfport, and the time I spent traveling through the Delta and visiting places like Starkville and Oxford. I wanted to incorporate all the cities that meant something to me,” Beverly said. “I wanted to let people know that Mississippi has all these unique places, and if you get a chance, go visit.”

Along the way, Sullivan and Baby notch a few items off the bucket list, mend fractured relationships and visit some historical sights around the state. While still in Gulfport, he confesses to his wife his struggles with alcohol. In Starkville, he makes amends with his son, Evan, over a game of basketball.

In Oxford, Sullivan reconnects with his daughter, Gracie, sharing a dance by the jukebox at the fictional Yazale’s Historic Café on the Square. The book devotes a couple chapters to this reunion and the city, highlighting the University of Mississippi and the historic Square.

“I’ve always been fascinated by the city of Oxford, just from its appeal to its historic nature. Everything about it has always resonated with me,” Beverly said. “The scene in the book that’s based in Oxford is, the main character and his daughter are eating in a café in the historic district. They reconcile and get over past differences, and I felt like Oxford was the perfect city to have that scene in the book.”

After he and Baby leave Oxford, Sullivan finds his estranged father, father, Edward, in a Catholic church on the outskirts of Greenville. Also at the Catholic church is a scene Beverly said is a trademark of his writing.

His previous novels, “The Flying Church of Orleans Parish” and “Ghosts of Beauvoir: A Supernatural Journey of Self-Discovery,” both feature a supernatural element, so Beverly said he had to follow suit with “Mississippi Revival Roads.”

“In all my stories, I try to have some sort of supernatural element to it. In ‘Mississippi Revival Roads,’ there are a couple of scenes where Eddie comes across some Catholic sisters, some nuns,” Beverly said. “He’s having this conversation with them one minute, and then the next, they’re no longer there.”

While “Mississippi Revival Roads” is hot off the presses, Beverly said he’s not taking time to relax just yet. Currently, he’s in the process of scheduling dates for a potential book tour and writing an adventure novel, tentatively titled, “Freeing the Magnolias along the Railway: the Untrue Story of how the Mississippi Civil Rights Museum came about.”

Once the ideas start, he said, it’s hard to stop creating – and he has no plans to stop any time soon. Beverly currently lives in Hattiesburg with his wife, Monique and their two kids, Mason and Morgan.

“For me, I always tell people, if I can accomplish what I’ve accomplished as a poor black kid from South Mississippi, you can do it,” Beverly said. “Those obstacles and challenges we encounter along the way make us stronger.”