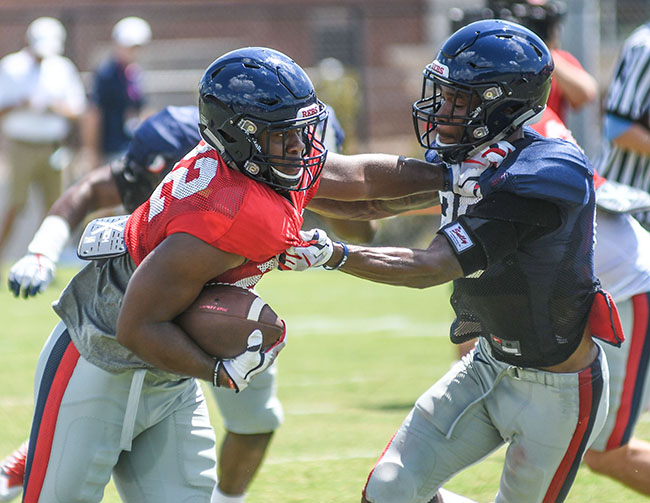 Scottie Phillips knew the opportunity he had at Ole Miss, though it wasn’t necessarily his primary motivation in choosing to continue his football career in Oxford.

Phillips is going through his first preseason camp with the Rebels amid a heated competition to be the No. 1 running back once the Rebels begin the season against Texas Tech on Sept. 1 in Houston. Phillips has separated himself a bit, not all that surprising of a development for a junior college transfer brought in with the expectation of making an immediate impact, though Eric Swinney is also getting some first-team reps in camp.

Freshmen Isaiah Woullard and Tylan Knight and Armani Linton, a converted safety, give the Rebels some depth there even without D’Vaughn Pennamon, who’s not going through camp as he continues to rehab his surgically repaired knee.

“Another instinctive guy, but he’s very light on his feet,” running backs coach Derrick Nix said of Phillips. “It doesn’t take him a lot of time to get going. He can get to his top speed right away, and when he makes his cuts, he’s not slowing down. He’s doing his cuts full-speed.”

For Phillips, he’s right where he’s always wanted to be.

Growing up in Mississippi, the Ellisville native always hoped he’d get a chance to play SEC football in his home state following his career at South Jones High, where Phillips ran for more than 1,600 yards and 22 touchdowns his senior season. But Ole Miss didn’t offer him a scholarship out of high school. Neither did Mississippi State. In fact, it was just “pretty much all the (junior colleges) in Mississippi,” he said.

Phillips stayed home and signed with Jones County Junior College, where FBS programs began to take notice. The 5-foot-8, 212-pounder earned NJCAA All-America honorable mention honors after ranking fifth in the nation with 1,212 rushing yards as a freshman and followed that up with a 1,070-yard, 13-touchdown campaign in his final season with the Bobcats.

Miami and UConn were among the school to offer Phillips, who was ranked the nation’s No. 2 junior college running back in 247Sports.com’s composite ratings for the 2018 recruiting cycle. But the long-awaited offer that came from Ole Miss last summer essentially ended his recruitment.

“Ever since I was in high school, Ole Miss has always been one of my favorite schools,” said Phillips, who committed to Ole Miss in July 2017 and signed in December. “So when they came calling, there was no question about where I was going to be.”

The chance to take over as the primary ball carrier from Day 1 only made Ole Miss more appealing. Jordan Wilkins took nearly all of last season’s backfield production with him to the NFL when he was drafted in the fifth round by the Indianapolis Colts after becoming the Rebels’ first 1,000-yard rusher since Dexter McCluster in 2009.

Having strung together three straight 1,000-yard seasons himself, Phillips believes he can do the same thing at Ole Miss in an offense he said is similar to the spread scheme he ran at JCJC. Going through the spring helped Phillips get comfortable with all the different plays, concepts and terminology of coordinator Phil Longo’s system, allowing him to focus on improving his pass protection to go with a running style he and his coaches best describe as explosive.

“I think I’m a downhill back that can make guys miss and turn 20-yard gains into 40-yard gains and touchdowns,” Phillips said.

Phillips also has the luxury of running behind one of the SEC’s most experienced offensive lines, making his personal goal of becoming the Rebels’ second straight 1,000-yard rusher not out of the realm of possibility with defenses also having to worry about A.J. Brown, DK Metcalf and the rest of the receivers back from the SEC’s top passing offense last season.

But Phillips is also thinking big picture for a program he’s always envisioned playing for.