What — and who — has surprised during Ole Miss’ camp? 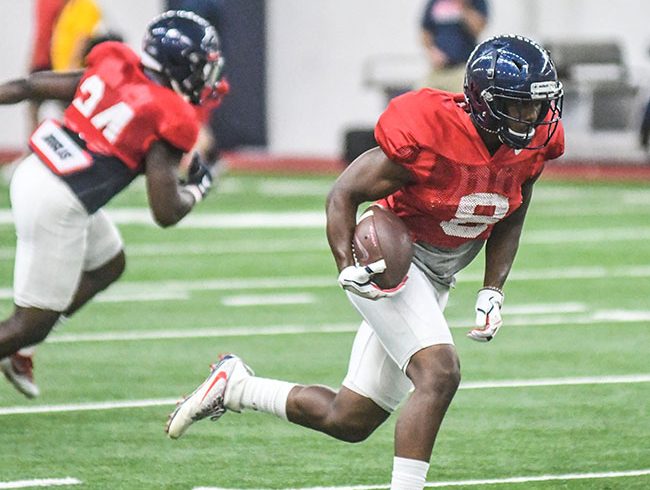 Ole Miss is moving into the latter stages of preseason camp with its season opener against Texas Tech less than two weeks away.

Some aspects have gone as expected. The offense, with nine starters back in Phil Longo’s system, has been ahead of a defense still working to solidify its depth chart with departures and a lack of past production breeding competition at a number of positions, particularly in the front seven. Like every season, newcomers have gotten a long look as Matt Luke and his coaching staff try to get a better idea of which freshmen and junior college transfers can help this fall.

With all of that has come some surprises, most of which, coaches said, have been positive.

For defensive coordinator Wesley McGriff, it’s largely been how the players who were around last year have progressed in knowing not only their responsibilities but those of others as the Rebels begin their second season in McGriff’s 4-2-5 scheme. How quickly the youngsters have been able to grasp plays and concepts, he said, has also been a pleasant development.

McGriff mentioned defensive end Qaadir Sheppard, safety Zedrick Woods and freshman linebacker Kevontae Ruggs as camp standouts. Ruggs spent all of last week running with the ones on the outside.

“I’ve been surprised in the biggest difference in understanding football from Year 1 to Year 2,” McGriff said.

With so much proven experience on the other side of the ball, Longo said the rapid development of some of the Rebels’ younger players has been encouraging for depth. Ben Brown’s camp has been so strong that the redshirt freshman is the favorite to start at right guard when the offense takes the field against the Red Raiders in Houston on Sept. 1 while four members of the Rebels’ 2017 signing class — Royce Newman, Bryce Mathews, Chandler Tuitt and Tony Gray — make up 80 percent of the second-team offensive line.

Sophomore Braylon Sanders and true freshman Elijah Moore, who has repped with the second team throughout camp, are in line to be part of the rotation at receiver while Tylan Knight, another freshman, is competing for carries at running back, though the 5-foot-7, 170-pounder’s most significant contribution this season could be in the return game.

Matt Corral is entering his freshman season a play away from being the starting quarterback as Jordan Ta’amu’s backup. Corral has said he’s to the point mentally where he’s comfortable running the entire offense if he had to, an assessment Longo agreed with. Longo also mentioned tight end Octavious Cooley as a player who’s taken a significant step in his development.

“These are all names that didn’t play a huge part in what we did last year,” Longo said. “Some of them weren’t even here. I think they’re going to be contributors to what we do this year, so that’s always a positive.”

Back at corner, Jaylon Jones embracing versatility in Ole…