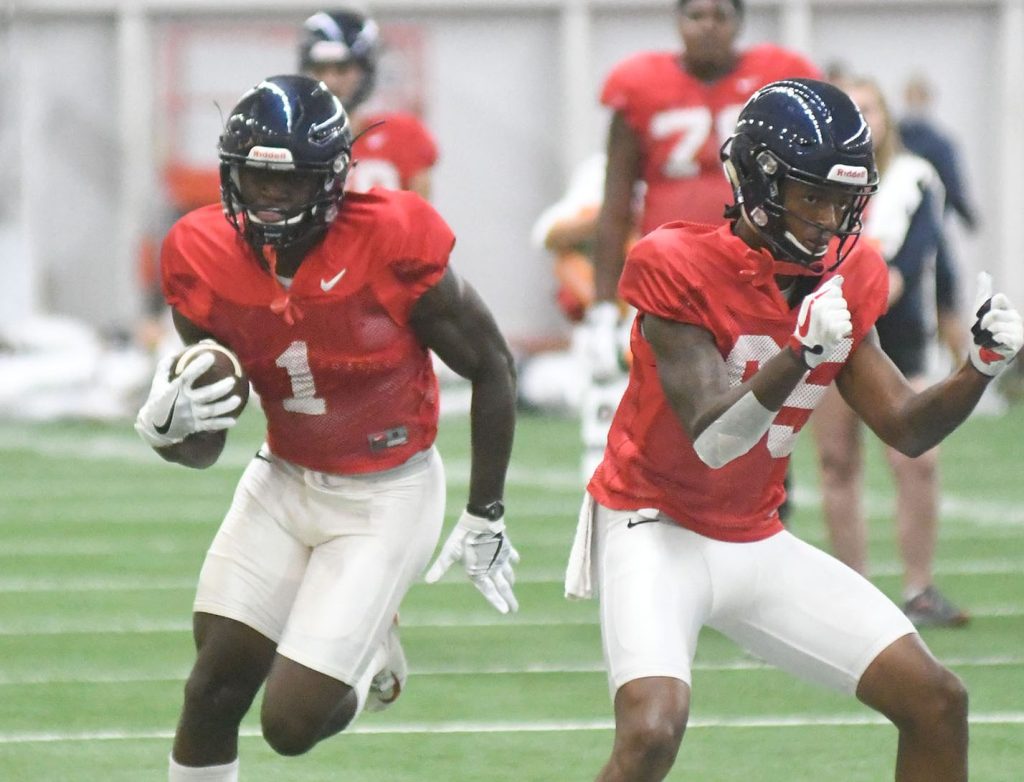 Ole Miss’ A.J. Brown (1) catches a pass and runs behind teammate Alex Weber (85) at football practice at the Manning Center in Oxford, Miss. on Tuesday, August 21, 2018.

DK Metcalf has enjoyed the back and forth between the offense and defense the last few weeks during Ole Miss’ preseason camp, but with the Rebels’ opener against Texas Tech less than two weeks away, the sophomore receiver is glad to be getting down to business.

“Just to focus on Texas Tech, that means football is getting closer,” Metcalf said.

Ole Miss began shifting from the grind of camp to preparations for its Sept. 1 opener in Houston during a two-hour indoor practice Tuesday. The Rebels haven’t completely neglected the Red Raiders during camp, but coach Matt Luke said his team had its most exhaustive study to this point with a lengthier film session and a 15-minute practice period devoted solely to its first opponent.

Ole Miss did so with A.J. Brown, who returned from a hamstring injury that sidelined him for the better part of two weeks. The Rebels’ All-American receiver was back in his usual spot in the slot and looked healthy as he ran through drills. Javien Hamilton was also back from a strained hamstring, rotating between the second and third teams at cornerback.

“He’s able to run routes but still being kind of careful that we don’t tweak it this late in the game,” Luke said of Brown. “But it’s very important to try to get our timing back and run routes versus air and getting him back into the swing of things.”

While the depth chart is all but set on offense, there was still plenty of mixing and matching on the other side of the ball. Junior college transfer Tariquious Tisdale continued to run with the first team at defensive end opposite Qaadir Sheppard while Benito Jones and Ross Donelly are still in a dead heat at nose tackle alongside Josiah Coatney.

Sophomore Mohamed Sanogo and true freshman Kevontae’ Ruggs were back where they left off last week as the first-team linebackers. Two more freshmen, defensive tackle Quentin Bivens and linebacker Jacquez Jones, ran with the twos while Montrell Custis repped at Star (hybrid linebacker/safety) ahead of junior college transfer Vernon Dasher, who returned from a groin injury last week.

Luke said he’ll finalize the depth chart after Ole Miss holds a mock game Saturday, but it likely won’t mean much heading into the opener for a front seven that’s still trying to find the right combinations with its most productive players last season — Breeland Speaks, Marquis Haynes and DeMarquis Gates — now in the NFL.

“I think it’ll be by committee,” Luke said. “You’ll have starters, but on the defensive line, you have to roll people through. You have to do that to stay fresh.”

Cornerback Ken Webster (hamstring) and receiver DaMarkus Lodge (ankle) didn’t practice Tuesday. Luke said Lodge is close to returning but was held out another day as a precaution. Braylon Sanders, who had been repping on the outside in Lodge’s absence, pulled a hamstring Sunday and was also held out.

Freshman lineman Jalen Cunningham missed practice after having surgery on a finger tendon while defensive lineman Sincere David was held out again after recently spraining his MCL. Luke said David and Webster are the two he’s most concerned about missing the opener, though he expressed more optimism about Webster being ready to go by that point.

Running back D’Vaughn Pennamon, who’s still working his way back from last season’s knee injury, is still a ways away from returning to competitive football but got some reps Tuesday.

Receiver Floyd Allen, who came to Ole Miss as a walk-on, was put on scholarship Tuesday. The senior played in six games last season, all on special teams, but had been getting some reps with the first team in Brown’s absence.

“Floyd Allen works hard day in and day out. I believe he deserved it,” Metcalf said. “He earned every bit of that scholarship, and the whole team was happy for him.”

Scottie Phillips is where he always wanted to be…