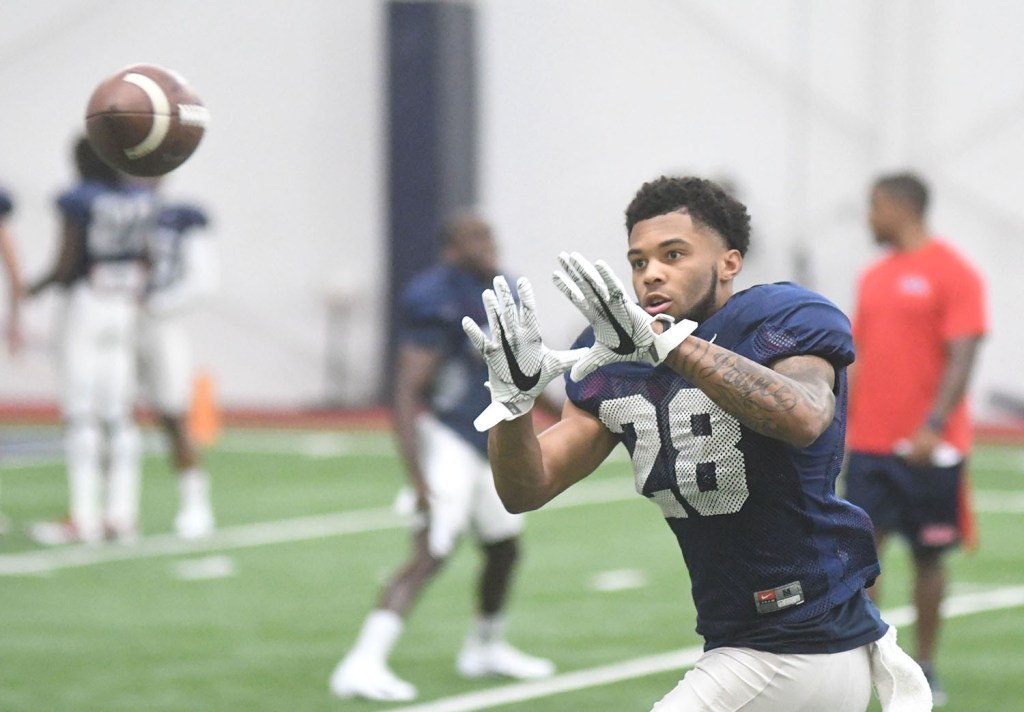 Ole Miss defensive back Cam Ordway (28) catches a pass during a drill at football practice at the Manning Center in Oxford, Miss. on Tuesday, August 21, 2018.

Ole Miss is in the midst of another week of preparation for its season opener against Texas Tech on Sept. 1 in Houston. The Rebels practiced for two hours indoors Tuesday with the first nine periods being open to the media.

Here are some notes and observations from the viewing periods…

• A.J. Brown returned to full participation after being limited in recent weeks with a hamstring injury and was back in his usual spot with the first-team offense. The Rebels’ All-American receiver didn’t show any signs of favoring his leg while running through drills.

Javien Hamilton (hamstring) was also back rotating in with first and second teams at cornerback. Fellow corner Ken Webster (hamstring), receivers DaMarkus Lodge (ankle) and Braylon Sanders (hamstring) and freshman lineman Jalen Cunningham (finger) weren’t present during the viewing periods. Myles Hartsfield and Alex Weber continued to run with the first team in the absences of Webster and Lodge.

• Junior college transfer Tariqious Tisdale continued to rep with the first team at defensive end while Mohamed Sanogo and true freshman Kevontae’ Ruggs stayed with the ones at linebacker. Another true freshman, Jacques Jones, repped with the second team at linebacker alongside Willie Hibbler.

Qaadir Sheppard, Benito Jones and Ross Donelly made up the rest of the first-team defensive line. Ryder Anderson, freshman Quentin Bivens, Hal Northern and Charles Wiley made up the second-team line. Montrell Custis worked ahead of Vernon Dasher at Star (hybrid linebacker/safety).

Here’s some of the action from Tuesday’s practice…