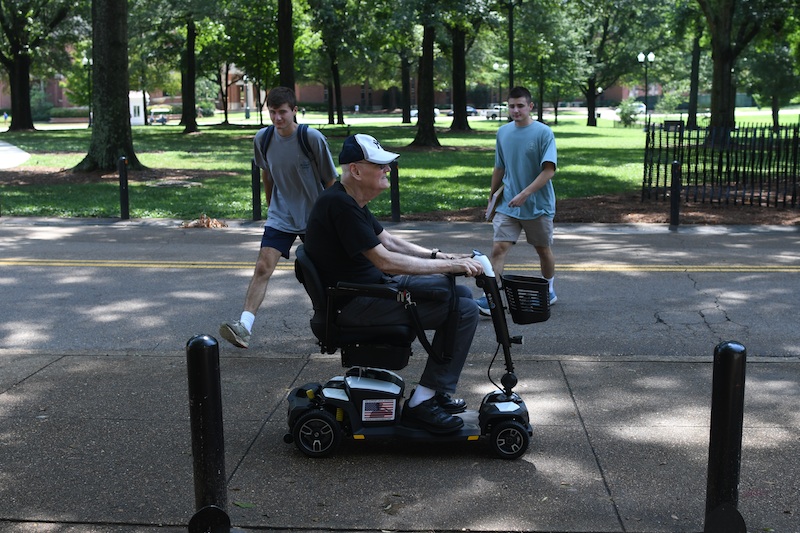 Jim Willis, 76, uses a scooter provided by Volunteers for Veterans to go to class at Ole Miss in Oxford, Miss. on Monday, August 20, 2018. Ole Miss students began classes on Monday.

James “Handsome Jim” Willis isn’t the typical Ole Miss student, but thanks to a few good Samaritans, the soon-to-be 77-year-old will be scooting to success this semester.

Willis is a Navy veteran and retired Teamster who, after 28 years, is fulfilling his lifelong dream of earning a degree. A social sciences major, Willis said he realized he needed to take classes on campus, but wasn’t sure how that would happen due to limited mobility from coronary artery disease.

“I’m handicapped. I can walk, but only about 50 feet before I’ve got to sit down,” Willis said. “I can park in the handicap spots, but I’ve still got to go to the buildings somehow.”

Newby said he exhausted several options before finding someone to donate a scooter for Willis, but was fortunate to find local organization Volunteers for Veterans Oxford.

“Volunteers for Veterans actually helps veterans in the community, and the community is big – it doesn’t just include the veterans home or the VFW or just the student veterans,” Newby said. “We have this giant group of veterans, and we’re connecting town and gown through partnerships like this. There was a problem, and these guys presented a real solution. It’s the best solution we could do right now, and it’s a good one.”

He called Joe Dickey and Tony Deal, leaders of the organization. Within an hour, they secured a brand-new Jazzy scooter from Jackson-based company Mobility Medical.

Newby said, while Willis is the first 77-year-old student veteran he’s worked with, he already knows he’ll be an asset on campus. Willis completed 98 credits 28 years ago at Ramapo College in his native New Jersey, so he said he looked forward to getting his feet wet in a classroom setting.

Every time he’s on campus, Willis will park outside the Veterans Resource Center in the Yerby Hall basement and pick up the scooter. He’ll be able to drive it up ramps, in elevators and even inside classrooms before returning it to the VRC to charge for the next day.

“The veterans are really good guys, and made me feel comfortable and are so excited that, at my age, I’m going back to school,” Willis said. “They said, ‘That’s fantastic. It’s a good thing for the younger guys to see.’”

Newby and the University have also matched Willis with a personal academic adviser, Jennifer Phillips. Corey Blount, an access services coordinator with Student Disability Services, as well as the University’s sign language interpreter, is also working with Willis.

“(Blount’s) wonderful to work with, especially with my population of students, because he’ll do anything and everything,” Newby said. “… He’s going to work with this guy who’s completely outside his wheelhouse, because he actually cares.”

Success seems to be the name of the game for Willis, who proudly proclaims to be 28 years sober and said he’s looking forward to offering a listening ear to classmates who think they have a substance abuse problem.

As a standing junior, Willis acknowledges he’s got a long road ahead before he gets his diploma, but said he’s excited to scoot across the stage as an 80-year-old graduate.