ACLU urges Aldermen to vote no on Downtown District 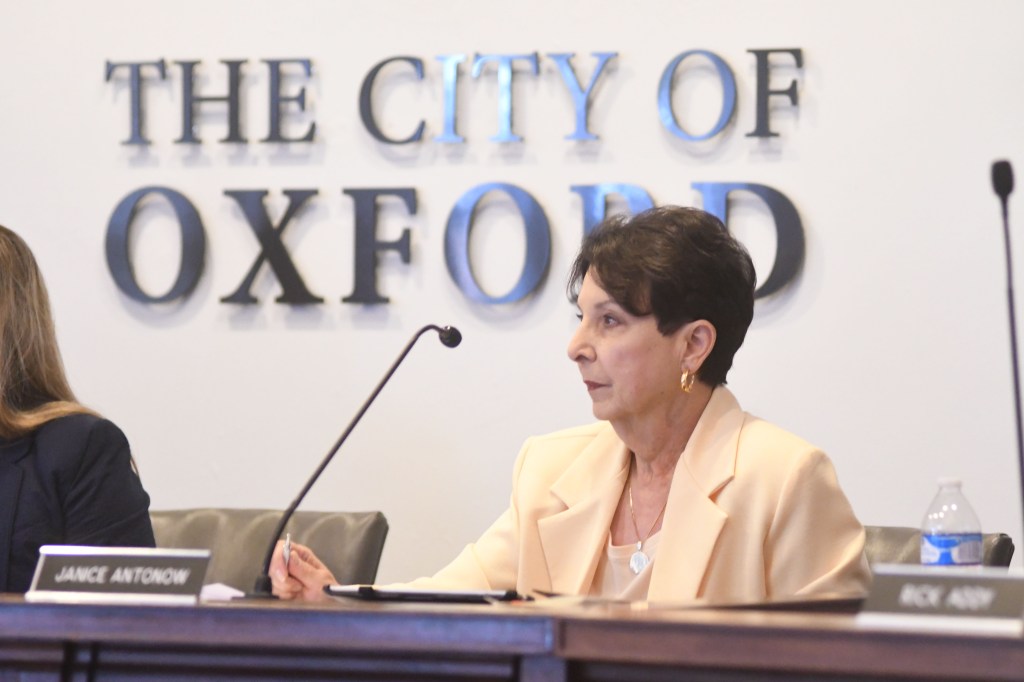 Alderwoman Janice Antonow asks the city board to postpone the vote on the alcohol ordinance during a meeting of the Board of Aldermen at City Hall in Oxford, Miss. on Tuesday, August 21, 2018.

The American Civil Liberties Union has spoken out against the City of Oxford’s proposed alcohol safety ordinance but, in doing so, presented some clear factual inaccuracies in an official letter sent to the Oxford Board of Aldermen.

The Board of Aldermen moved to postpone a vote on the ordinance during Tuesday night’s regular meeting, making amendments regarding the removal of a $75 processing fee for event venues and specification of language requiring law enforcement to provide a warrant in order to obtain video camera footage. This decision was made prior to discussion of the letter, Mayor Robyn Tannehill confirmed after the meeting.

Tannehill said at the time that she and the board had not yet read the letter, which was sent at approximately 4 p.m. Tuesday, but would provide comment following a review of the document and discussion with the board. However, she did acknowledge that transparency has been a hallmark of discussion of the ordinance.

“I will emphasize that not only has this been a very long process, but this has also been a very open and transparent process,” Tannehill said. “This ordinance has seen numerous public meetings, public forums. I’ve had more hours of one-on-one meetings than I can even calculate at this point.”

The letter from the ACLU of Mississippi stated that, due to the specific provisions regarding event venues and the “imposition of mandatory camera surveillance systems,” it strongly opposed the ordinance. The letter went on to assert that the “event venues” section of the ordinance, section 14-103, specifically targeted an Oxford business, The Lyric Theatre, “known for its events sponsored by and for Oxford’s black students and citizens.”

Referencing an anonymous source, the letter, signed by ACLU of Mississippi legal director Joshua F. Tom and ACLU of Mississippi staff attorney Landon Thames, went on to give an account of an April incident at The Lyric in which a gun was fired. In the account, the letter quoted Tannehill and Oxford Police Chief Joey East as making racially motivated remarks, even though the two have publicly denied saying anything of the sort on multiple occasions.

“Section 14-103 is especially egregious (and illegal) if this burden is imposed on an establishment simply because it hosts events mainly for black citizens and students. This seems to be the case, because a source with knowledge of the situation informed us that the reason the ordinance was proposed was an incident involving a breach of security at the event venue in Oxford,” the letter read. “… The mayor and police chief arrived at the event venue after the incident and berated the venue management for their ‘poor judgment in having this kind of event.’”

The letter also stated that the event in question, the “Shoot Your Shot” jersey party was an invitation-only event, even though witnesses stated it was a ticketed event, and named the gunman as an “uninvited individual.” The ACLU stated that, if the ordinance is truly a direct result of The Lyric incident, it has a “very clear discriminatory purpose” and is in violation of the Equal Protection Clause of the Fourteenth Amendment.

In public meetings, both Tannehill and East have provided evidence that an ordinance of this type was discussed years before the incident at The Lyric took place. Tannehill did acknowledge that The Lyric incident was somewhat of a wakeup call during a public meeting in July, but maintained that the ordinance was not proposed as a result of a single event.

Alderman Janice Antonow, who made a motion to clarify language regarding law enforcement obtaining security camera footage as well as the motion to postpone the vote, also acknowledged the amount of public input that shaped the ordinance in its current form.

“As the mayor said, we’ve been responding to all your emails and calls and text messages, because this ordinance hardly resembles what it started out as,” Antonow said. “We’ve taken a lot of things out, we’ve added different things that have been suggested. We hear you. We’re listening.”

The letter also addressed security camera regulations in the ordinance, but the issues presented were derived from an earlier draft and are no longer part of the document. The matter of the imposition of “mandatory and complex” camera surveillance systems for affected businesses, it read, imposes an unnecessary cost for business owners. It also, according to the letter, amounts to government surveillance.

“As written, the proposed ordinance would require restaurants, bars, and entertainment venue owners to maintain sophisticated cameras at entry and exit doors of restrooms, for example, providing law enforcement officers with total access of that footage,” the letter reads. “This poses serious threats to constitutional rights, essentially amounting to government surveillance and discriminatory abuse.”

The current language of the ordinance does state that businesses are required to maintain cameras and appropriate lighting, and lists several locations where cameras should be mounted. However, the ordinance states that in order for law enforcement to obtain footage, a “lawful request,” such as a warrant, must be presented to the business owner. It also states that the police chief or a designee reserves the right to periodically sample “only the most recent footage” to determine compliance.

The ordinance will be discussed and potentially voted on at the Sept. 4 meeting of the Board of Aldermen. The decision to postpone the vote, Antonow said, was in keeping with the spirit of open communication the board has worked toward throughout the adoption process of the ordinance.

“Today, we got substantive emails the very last minute that we didn’t have a chance to even look at. In fairness to the people who sent these emails, I think we really need to postpone the vote so we have a chance to consider,” Antonow said. “Some of the information was new, as I glanced over it, and I would like to digest that before we move forward.”