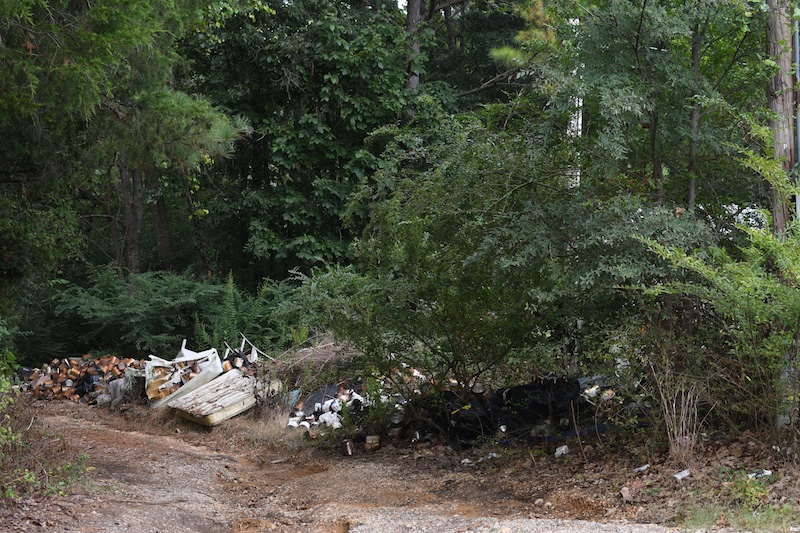 The driveway at 8 County Road 2001 is lined with industrial food cans. The Lafayette County Board of Supervisors voted Monday to take steps to clean up the property.

Two properties in Lafayette County may need to be cleaned up by a higher power if the owners do not do so in the next 30 days.

During Monday’s meeting of the Lafayette County Board of Supervisors, county building inspector Joel Hollowell discussed conditions of 30 County Road 514 and 8 County Road 2001, saying the current condition of the properties is a “menace to public health and safety.” There are certain state-mandated guidelines a property must meet to reach this conclusion, Hollowell explained.

“What we used, as far as a means to condemn these properties and require whatever it is that needs to be done, is state statute 19-5-105,” Hollowell said. “It doesn’t lay out any set criteria for what constitutes a menace to public health and safety, so an individual representative for the county, like myself, would be the one who could make that determination.”

Hollowell said he’d received several calls about the two properties from adjacent landowners in recent months, which led him to decide to take this next step was the right thing. If the properties were in uninhabited areas, he said, there wouldn’t be a need for such decisive action at this time. Because the properties are in populated residential areas, the issue warrants action from the county, he said.

In the case of the property located on County Road 514, Hollowell explained that the current property owner lives in a nursing home and therefore cannot maintain the land. The house on the property is structurally sound, he said, so the county will need to periodically evaluate it.

The County Road 2001 property is a little more involved, however. Hollowell explained that the property consisted of a house with clear structural issues, a trailer with a renter living in it, hundreds of industrial food cans, mattresses, old televisions and two dogs chained in the middle of the yard. After recommending the house and property be condemned, Hollowell said he hopes that this action will be a wakeup call for the property owners.

“All of the adjacent property owners have noticed an increase in rodent population and snakes,” he said. “If you could define rodent harborage and put a picture with it, this would be the perfect picture. It’s a perfect place for all those things to hide out.”

Hollowell said the resident on the property has been compliant and wants to get rid of the garbage as much as anyone else. The resident said he originally acquired the cans to sell for scrap metal, but the quantity quickly became too much to handle.

John Whadley lives near the property, as does his grandmother. During a public hearing regarding the conditions, Whadley explained the impact the garbage has on neighbors.

“It needed to be cleaned up for a while,” Whadley said. “It’s an eyesore to the neighborhood. My grandmother’s house is behind there, and we’re trying to get her driveway fixed. There are just cans all the way up and down the road.”

The supervisors ultimately voted to, after a grace period of 30 days, send county work crews in to clean the two properties if property owners don’t do it themselves. Before the meeting, county attorney David O’Donnell confirmed a letter had been sent to the property owners, making them aware of the situation. If the county has to clean up the property, the cost will be placed as a lien upon the house, he said.

Hollowell maintained that decisions like this are not easily or hastily made, but said they’re sometimes necessary when it comes to keeping people safe.

Music video by King Twin Rappers to take over…