How Ole Miss surprised walk-on Floyd Allen with a scholarship 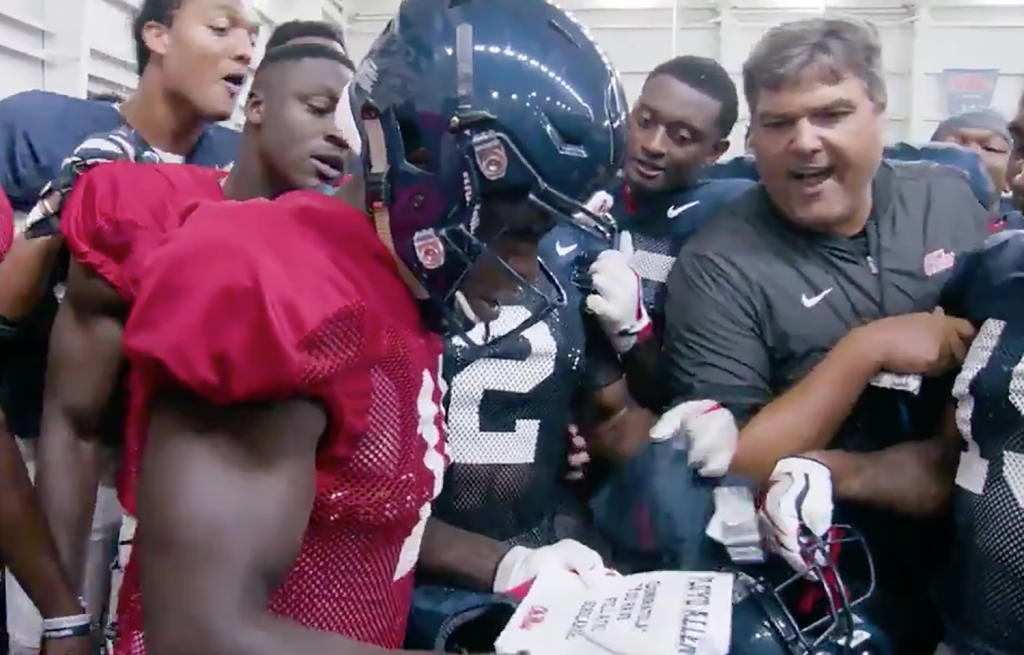 Ole Miss receiver Floyd Allen reads a piece of paper telling him he's being put on scholarship during practice Tuesday in Oxford. (Twitter/@OleMissFB)

How the Rebels’ receiver came to find that out may end up being just as memorable for the former-walk on.

Ole Miss coach Matt Luke hinted at it following Tuesday’s practice, saying he got creative with the way in which Allen’s scholarship was revealed. A video posted to the team’s official Twitter account showed exactly how it went down.

While addressing the team, Luke called Allen and defensive back Montrell Custis in front of their teammates to recognize them for their unselfishness after both players told Luke they were willing to change their jersey number in order to play special teams. Allen wore No. 17 while Custis had No. 25, but Willie Hibler and D.K. Buford, who are also special-teams candidates, wear the same numbers. Double numbers aren’t illegal unless players with the same number are on the field at the same time (Allen changed his to No. 11 while Custis will wear No. 2 this fall).

Luke then revealed he had gifts for Allen and Custis, but in order to determine who got which gift, the two would get one shot at Rebel Drill, a one-on-one matchup between receiver and defensive back. The loser would get a team hoodie while the winner would receive a duffle bag with “a surprise inside,” as Luke put it.

Allen lined up just outside the 5-yard line going in while Custis, who’s already on scholarship, lined up across from him on the goal line. Allen won by beating him inside on a slant for the touchdown.

After a brief celebration, Allen was given the duffle bag by Luke, who told Allen to reach inside for the surprise. It was a piece of paper telling Allen he was being put on scholarship, but his coaches and teammates played coy for a few more seconds.

“What is it, a gift certificate? What is it?” Luke said as Allen pulled out the piece of paper. “Read that out.”

Allen barely got a word out before being mobbed by his teammates who had formed a circle around him.

Allen, whose winding road to the SEC has him playing at his third school in four seasons, had been getting reps with the first team in the absence of A.J. Brown, who returned from a hamstring injury Tuesday. Regardless what Allen’s role ends up being this season, he’ll always have another story to tell.

“He was real excited,” Metcalf said. “I really couldn’t see because the whole team was surrounding him. But after we got done, he was tearing up a little bit.”