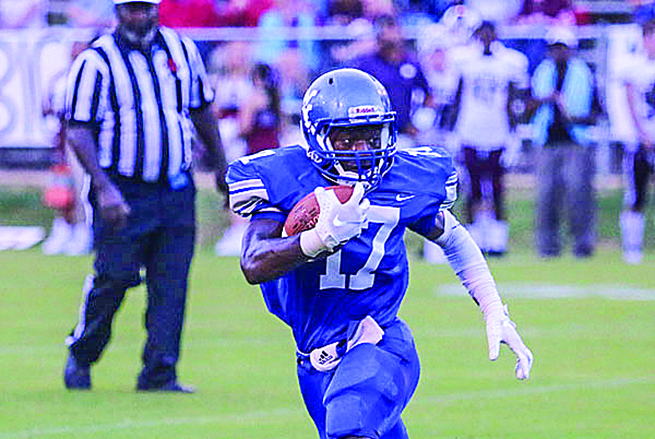 There were plenty of positives to take away from Friday’s season opener against Eupora, but Water Valley knows there is plenty of work still to be done.

The Blue Devils snapped their three-game losing skid to the Eagles with their 34-8 win last week, using a potent offensive ground attack.

With 308 rushing yards and four touchdowns, Water Valley’s run game is ahead of the passing game, but that was something head coach Brad Embry anticipated coming out of preseason camp.

“I was pleased, definitely,” Embry said of Friday’s performance. “We played with great effort, but we didn’t execute all the time, but that’s going to get better week by week as long as we practice like we’re supposed to. …If you look at it, it’s basically the same guys who played in the playoffs last year, and they ran the ball pretty well against good competition. That’s why they’re way ahead. We’re just more experienced doing that right now.”

Tay Rucker and Jacob Truss rushed for more 100 yards each during last week’s game. Those numbers could continue this week when the Blue Devils travel to Coffeeville for the annual Railroad Rivalry game Friday at 7 p.m. The game can be heard on 105.5 FM.

“We know what we need to work on for ourselves and we’ve got to get ready for Coffeeville and what they do,” Embry said.

Water Valley (1-0) has won the last three contests against the Pirates, by an average 36 point margin. The past two games have seen the Blue Devils put up 55 points on the Coffeeville (0-1) defense.

Coffeeville enters the game with a new head coach in Reed Falkner, who brought in an entirely new staff of assistants.

Falkner, who replaced Christopher Suggs, lost in his debut, falling on the road to Calhoun City 47-6 in the Pirates’ season opener last Friday.

“It’s a rivalry so that always plays a big part in it,” Embry said. “They have a new coaching staff that got in late, so they’re still trying to install what they want to do and put their stamp on the program. …Our kids will be ready to play, but their kids are going to be ready to play, too. We have to make sure we do our job again this week.”